A building with a purpose | OHSU Foundation
Skip to content 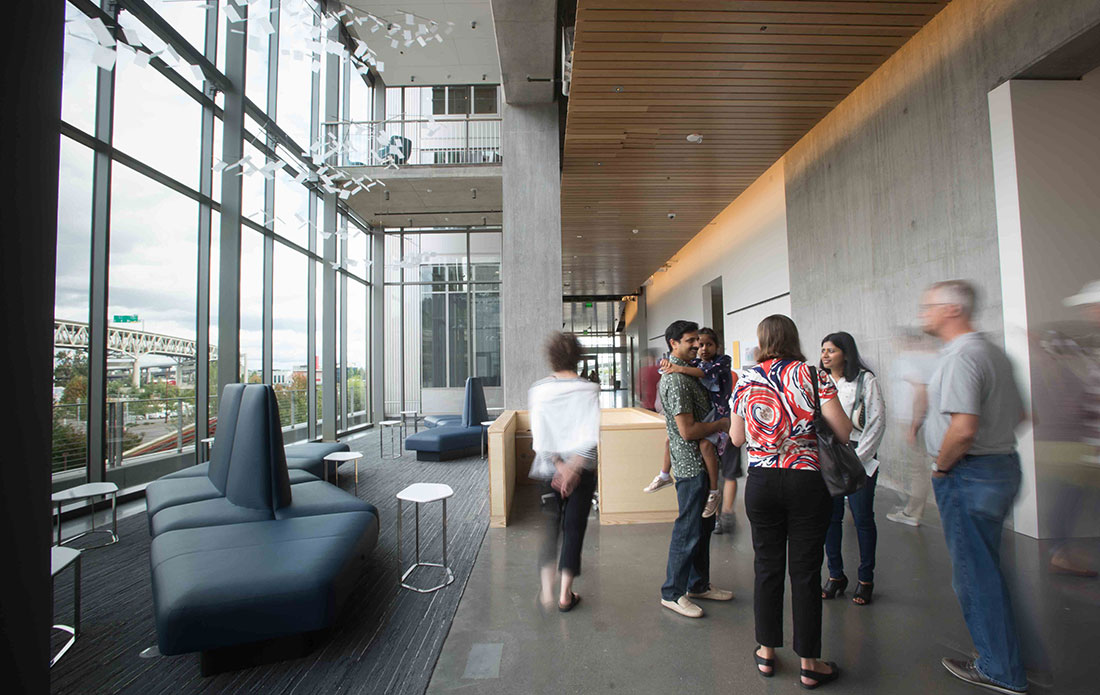 A building with a purpose

On Sept. 7 and 8, OHSU’s Knight Cancer Institute opened the doors to its new Knight Cancer Research Building (KCRB)— an innovative building that will house up to 650 cancer researchers and staff focused on the early detection of cancer.

The seven-story, 320,000-square-foot building in Portland’s South Waterfront is designed to encourage interaction and collaboration among the researchers from different scientific disciplines. The building was designed to transform how cancer research is done. It includes open work spaces, large lab areas congregated at the center of four research floors and common areas on several floors where scientists share advanced lab equipment. It also includes an auditorium on the ground floor, a shared kitchen for staff on the third and fourth floors, and a lounge and terrace area on the sixth floor. Knight Cancer Institute administrative offices are on the sixth and seventh floors.

Take an online tour through the building with our photo gallery.

Funding for the building was made possible by a $200 million bond issue from the state of Oregon as a part of the $1 billion Knight Cancer Challenge, initiated by Nike co-founder Phil Knight and his wife, Penny. $160 million of the bond issue was designated for the KCRB, with the remaining $30 million coming from the OHSU Knight Cancer Institute.

On September 7, Governor Kate Brown joined OHSU leaders, patients, and community members for a ribbon-cutting ceremony to celebrate the opening of the new building. The building was open to the public on September 8.

We attended the public open house on September to see what attendees — along with the OHSU scientists who were serving as tour guides — thought of the building.

“I’ve been getting (cancer) treatments at OHSU for over four years and so I knew they were doing research. I figured I might as well come see what they were doing.

“This space is so much more communal. Everything was designed so people bump into each other — to encourage cross-pollination. It makes perfect sense to me.”

Marcelino Galeana, Portland
Worked as a woodwork contractor on the building

“We did all the planters, and the floors. From the very get-go when our boss told us about the project and what it was going to be, I said I wanted to be a part of this.

“I get to be part of something bigger. Every time I meet with friends who work someplace else, I say, ‘Oh you know what? I’m working on this building. And this will be its purpose.’ And I’m part of it. I’m part of it.”

“This is really fabulous. I’m very impressed. What surprises me is that I didn’t realize how connected everything was going to be and how open it is — to encourage collaboration. I didn’t think along those lines, but the creators of it purposely chose to create it in that fashion. It’s going to be great. It is very cool.

“And here, it’s stimulating … all the light.

“To see that we’re moving forward with the idea of collaboration is just really remarkable. And the building is remarkable. And I also will just keep my fingers crossed that they will have magic going on here, and they can cure what is a major problem.”

“I really like it. I was really excited to show it off Friday and Saturday. I just think it’s such a beautiful building and it’s super functional. And it’s a really nice place to come to work.

“Often times, we scientists are stuck in kind of like a basement, with no light. This is just the polar opposite. There’s so much light and it’s so open. Knowing you’re going to have a light, amazing space makes all the difference. It makes you want to come to work in the morning.

“So many times there are three different labs right next to each other, and they have the same expensive piece of lab equipment. Here there is shared common lab equipment, and already this is fostering collaboration. Having the big fourth floor kitchen, with coffee all the time — food and coffee are something that bring people together everywhere. I’ve met so many people, waiting for the coffee to be made.

“And there are little spots for breakaway meetings, breakaway chats with people, without the trouble of ‘Oh, we have to go book a conference room.’

“I think that it’s working out really well. A building can’t force you to collaborate with people. But a building can facilitate the meeting of new people — that will eventually lead to more collaboration.

“I feel really lucky to be here.”

“It’s a beautiful building. I think the building is really special and helps us do our job better for a number of reasons. In part, that’s because we were involved in the design of the building’s work spaces, and I think that was really important.

“At CEDAR, one of our guiding principles is that we are one team. I think this building fosters that guiding principle. To work efficiently as a team you need a space where all the people can congregate together and interact with each other in a productive way. The building is designed in a way that you are basically a few feet from most of the things you need to work with, and the people you need to collaborate with.

“At CEDAR, we have biologists, engineers, population scientists and data scientists, working together. This multidisciplinary team is now in the same building. We want people to be together from the point they conceive a project.

“I like to think on my feet as I go, and we have a lot of white boards in that building. I love it. On every wall, there’s a white board. That’s designed so people, wherever they are, can think of something and write it down. We want to challenge people to always be thinking.

“I love the culture. I love the design. I love what we stand for.”

“I think one of the most striking and exciting elements is the 10,000-dot donor art piece that’s in the front. I purposely walk in that entrance every day to remind myself of the greater purpose we’re here for. I do not do cancer research just because I’m interested in biology. I really think about it from the perspective of how many people are going to help, and I want to be a part of that.

“I see that donor piece, and it reminds me that it’s a lot bigger than the day-to-day. You have to consider what you’re doing — and the bigger purpose. The Phil Knight quote (at the building’s ground floor entry — “Is there a higher calling than curing cancer?”) is inspiring and a great motivator.

“I know we all feel that it’s an honor to work here, but to see it all here. It brings us all together.”