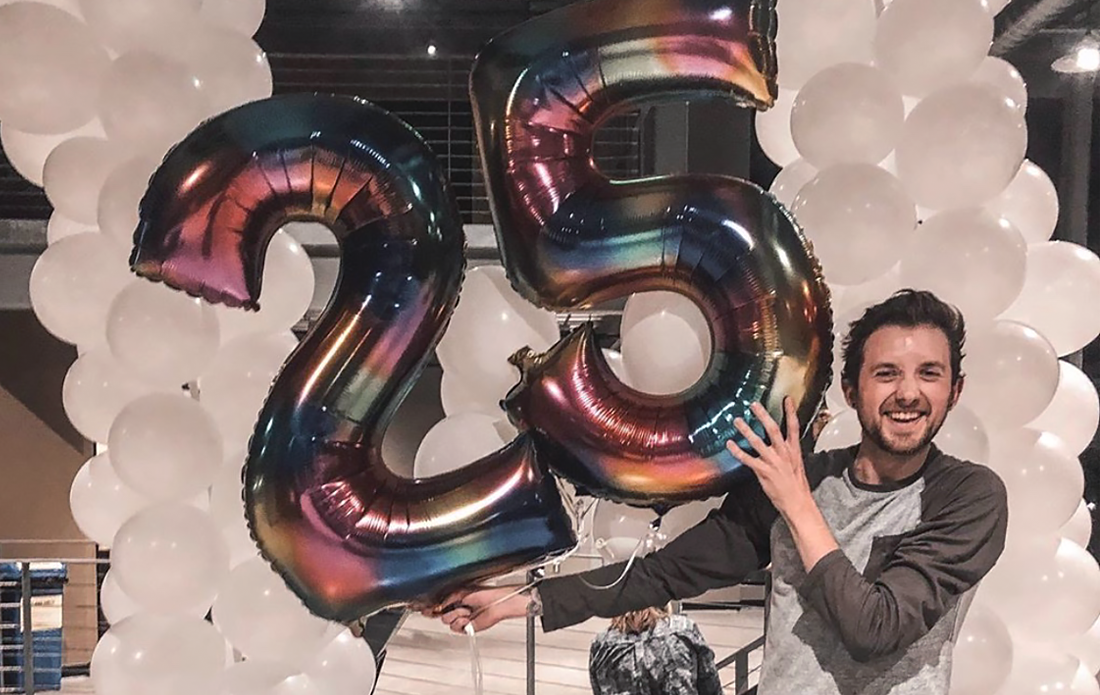 Matt Pozsgai describes himself as an ordinary guy with an extraordinary hunger for life. When he was 4 months old, he was diagnosed with the life-shortening disease cystic fibrosis.

Cystic fibrosis is a genetic, progressive disease that affects the lungs, pancreas and other organs. Over time, cystic fibrosis limits a person’s ability to breathe. It’s rare — about 30,000 people in the U.S. have it. The life expectancy is around 40 years old. Birthdays are a big deal.

That’s why when Pozsgai reached his milestone birthday of age 25, he wanted to celebrate in a big way. And he did so by giving back to OHSU Doernbecher Children’s Hospital — the hospital where he received lifesaving care for 22 years of his life.

A life with cystic fibrosis

People who have cystic fibrosis get persistent lung infections. Germs are especially dangerous. When the body’s immune system attacks the germs, the lungs become more inflamed. This creates a vicious cycle — the more inflammation, the more mucus; the more mucus, the more risk of infection.

Growing up, Pozsgai was a relatively healthy cystic fibrosis patient. But when he started high school in 2009, he caught a bout of bacteria that pushed him into a health spiral. He was only able to physically attend 28 days of his freshman year.

Despite the odds stacked against him from the beginning, Pozsgai attended his senior prom and graduated in 2013. During those four years of high school, he was hospitalized 20 times. His pulmonary function test indicated his lung function dropped to the upper range of 50 percent.

“It was a surprise early on how positive of an experience it can be — the relationships you make, the quality family time you have. The people at Doernbecher have become a family to me.”

For nearly 10 years, he averaged a hospital admission every four months — all spent at Doernbecher. In many ways, Doernbecher became a second home.

“Growing up, I was always scared of getting sick and having to stay in the hospital,” Pozsgai said. “It was a surprise early on how positive of an experience it can be — the relationships you make, the quality family time you have. The people at Doernbecher have become a family to me.”

Today, Pozsgai receives joint care at the adult cystic fibrosis clinic at OHSU and Legacy Salmon Creek near his home in Vancouver, Washington. He visits for regular “cleanouts” of his lungs to get rid of bacteria and for intravenous immunoglobulin treatment infusions to help boost his immune system.

Cystic fibrosis symptoms and therapies are different for each person. On a day-to-day basis, Pozsgai spends two hours doing treatments, which ranges from albuterol inhalers to a few pills with each meal.

Pozsgai was recently prescribed a new drug called Trikafta that’s considered to be a game-changer for patients with cystic fibrosis. Since starting this new treatment, Pozsgai has felt the best he has in a long time — his lung function has risen, he’s full of energy, and he visits the gym daily. Although it’s too early to identify the long-term improvements, it’s a step in the right direction.

Throughout his entire journey, Pozsgai has remained optimistic and courageous. He launched his own YouTube channel that documents his pursuit of living a fearless life by accomplishing extraordinary things.

“I don’t like the idea of not being able to do something. The idea that something may be too challenging motivates me even more.”

Things like climbing 42 flights of stairs with full firefighter gear — with only 50 percent lung function — to raise awareness and money for cystic fibrosis. Or participating in a polar plunge, where you take a dip into icy waters during the winter to raise money for charity.

“I just have an overwhelming urge to do as many things that I can, with however much time I have,” he said. “I don’t like the idea of not being able to do something. The idea that something may be too challenging motivates me even more.”

In addition to Pozsgai’s sense of adventure is an overwhelming sense of gratitude — for his supportive family and friends, for the care he received at Doernbecher and for reaching his 25th birthday.

“I really believe that if it weren’t for the care that I received at Doernbecher, I wouldn’t have made it to this milestone birthday,” he said. “I’ve always wanted to give back to Doernbecher, and I never knew how I could. I was inspired by a video on YouTube where a group of guys threw a party based completely off favors and the kindness of strangers. I thought, ‘Why can’t I do that, too?’”

“Doernbecher is an amazing place. They’ve given me so much, and it was the least I could do to give back.”

Within weeks of his birthday, Pozsgai set out to throw a birthday-fundraising event benefiting Doernbecher. He worked tirelessly to contact multiple restaurants and businesses with the hope of getting donations. He secured more than 10 different sponsors, including the venue, food, music and raffle prizes.

“It was awesome to see my family, friends and complete strangers rally behind me to see this happen. It far exceeded my expectations. It was very, very humbling,” he said. “Doernbecher is an amazing place. They’ve given me so much, and it was the least I could do to give back.”