A sense of urgency | OHSU Foundation
Skip to content 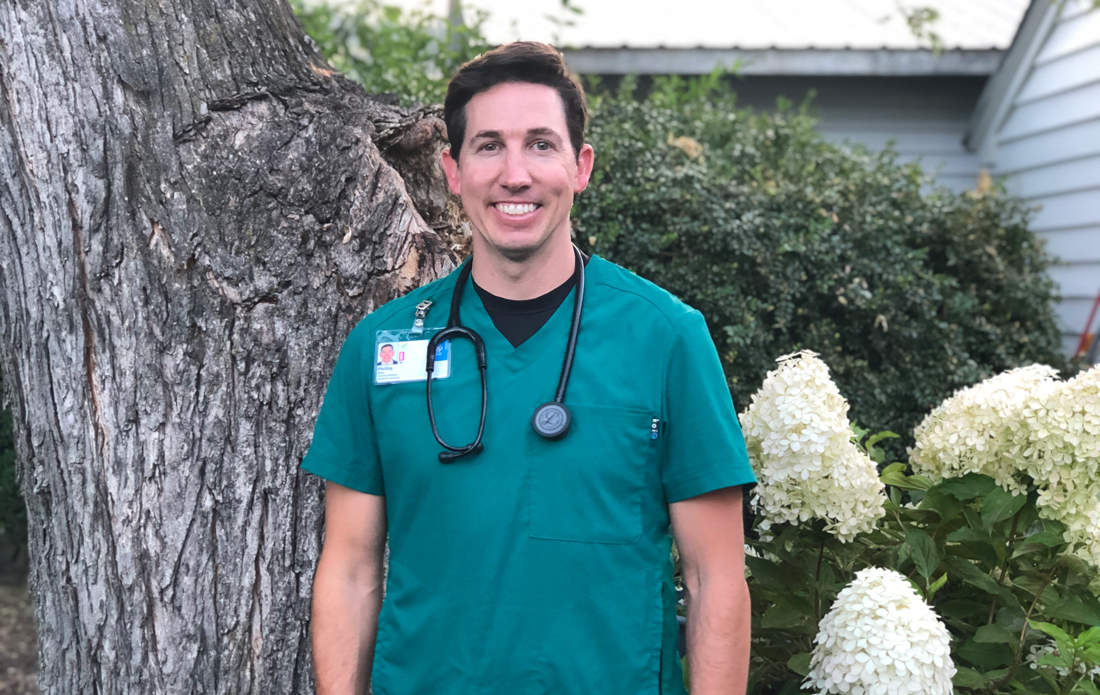 A sense of urgency

Phillip Rice thrives on intensity. As a teenager in rural Oregon, he volunteered at the Parkdale Fire Department. As soon as he turned 18, he started an emergency medical technician (EMT) course at Columbia Gorge Community College and when he was 25, joined the U.S. National Guard.

“I enjoyed helping people, and the medical side of it became my passion,” he said.

In 2009, he took on an active duty role with the National Guard and moved further out in eastern Oregon, where he assisted soldiers returning from deployment. During his time with the Guard, he earned a bachelor’s degree in agriculture, which he put to use running a ranch with his wife and daughters.

But Phillip always wanted to return to the medical field. Nursing attracted him because he enjoyed compassionately helping others in their time of need.

“This is the most challenging program I have ever gone through, but it’s very rewarding.”

It was now or never, he thought, when he learned about the OHSU School of Nursing’s accelerated bachelor’s degree with a major in nursing program. The program lasts five quarters or 15 months of full-time nursing coursework and prepares its graduates to become registered nurses.

“This is the most challenging program I have ever gone through, but it’s very rewarding,” he says.

His experiences have included spending time on OHSU’s Trauma unit, which felt familiar to him after his time as an EMT and in the military; and working in downtown Portland’s Old Town neighborhood, helping low income, marginalized and homeless people obtain health and social services care.

“These are all very unique learning experiences. You are learning something new, as well as a different way to look at things: Through the eyes of a nurse. And that, to me, means someone who puts the needs of the patient first and uses their expertise and clinical judgement to evaluate situations and help patients achieve and maintain health and wellness,” he said.

“This was the answer to our family’s prayers. I am so grateful.”

When Phillip got into the program, he and his family were uncertain how they were going to pay for his schooling. He wanted to pursue his dream, although they didn’t know where the funds were going to come from. Last summer, he took out an emergency loan when he couldn’t get any educational loans, but after that was awarded two scholarships.

The first award, an OHSU School of Nursing Scholarship for Disadvantaged Students (SDS), provided most of his tuition and fees; the second, a scholarship from the Pearson Foundation contributed $1,500 for the 2019-2020 academic year.

“This was the answer to our family’s prayers,” he said. “I am so grateful.”

After he becomes an RN, Phillip would like to return to La Grande and work at Grande Ronde Hospital’s intensive care unit (ICU) for several years. Following that, he’d like to become a flight nurse in La Grande and help transport patients. Because it’s a relatively remote hospital, many patients there are transferred out of Grande Ronde to larger hospitals in Bend, Oregon; Boise, Idaho; or Tri-Cities, in Washington.

“I’ve always been a person who’s been there in intense situations, and I feel like I’m good at calming people during those times. I want to use that skill as best I can and help people,” he said.