A tribute to Y.B. Talwalkar | OHSU Foundation
Skip to content 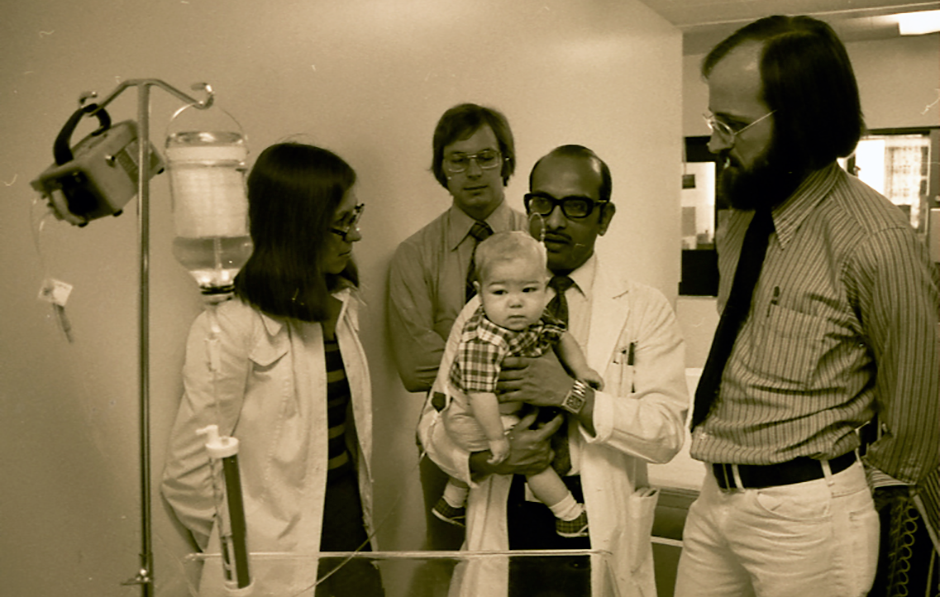 A tribute to Y.B. Talwalkar

Dr. Y.B. Talwalkar’s family describes him as a man who always knew what he wanted. Growing up in India, Dr. Talwalkar knew he wanted to be a doctor from an early age. His father died of a heart attack when he was 10, and he never lost his focus on medicine after that.

The first time he saw his wife, he knew she was the one. “He saw me at his brother’s wedding and decided he would marry me. And so he did,” said his wife of 52 years, Sushama Talwalkar.

Arun, as he was known by family and friends, would go on to become a giant in the field of pediatric nephrology, a respected researcher, teacher and doctor who gave hundreds of children a new chance at life.

“Talwalkar was the epitome of the academic physician. He was someone who cared about the patient but also kept the bigger picture in mind. He balanced patient care, education and research innovation.”

Dr. Talwalkar came to Oregon in 1971 as a research fellow at what was then the University of Oregon Medical School, having completed his pediatric training both in India and at Harvard University in Boston. His career took off quickly, and he was appointed to the faculty in 1972 and then received the inaugural Joseph B. Bilderback Teaching Award in 1974, in recognition of his abilities as a teacher and doctor.

Pediatric nephrology was a young field in the 1970s, and Dr. Talwalkar was instrumental in shaping it. In partnership with Steven Alexander, MD, he brought continuous ambulatory peritoneal dialysis to the children of Oregon in 1979. They were among only a handful of doctors in the world providing this service to children at the time. CAPD allowed patients to receive dialysis fluid (a fluid that cleans the kidneys when they are failing) at home, instead of having to be hooked up to an artificial kidney machine at a clinic or hospital. The new method was revolutionary, increasing survival rates and making dialysis less of a burden on families.

“Talwalkar was the epitome of the academic physician. He was someone who cared about the patient but also kept the bigger picture in mind. He balanced patient care, education and research innovation,” said Randall Jenkins, MD, who studied under Dr. Talwalkar in the 1980s and is now the division chief of pediatric nephrology at OHSU.

Dana Braner, MD, refers to Dr. Talwalkar as a “triple threat,” the rare doctor who is an effective teacher, researcher and clinician.

“He brought discipline and a desire for excellence in everything he turned his attention to, whether it was medicine or painting,” said his son Abhi Talwalkar.

His sons say he led by example, inspiring them to not only achieve career success but to also live full lives.

“He was a humanist and a minimalist,” said his son Ron Talwalkar. “He taught us to not want or need a lot to be happy.”

“He brought discipline and a desire for excellence in everything he turned his attention to, whether it was medicine or painting.”

His family has ensured that his legacy lives on in the form of a new endowed professorship, the Dr. Y.B. Talwalkar Professorship in Pediatric Nephrology, in the OHSU School of Medicine, Department of Pediatrics. The endowed professorship will allow an outstanding faculty member to advance his/her work, inspire others and develop new solutions that improve human health.

“This is a fitting legacy for Dr. Talwalkar. The professorship will help us recruit the best faculty and fund research projects that might need extra support between funding cycles,” said Jenkins. “We are extremely grateful to the family for this far-sighted gift.”