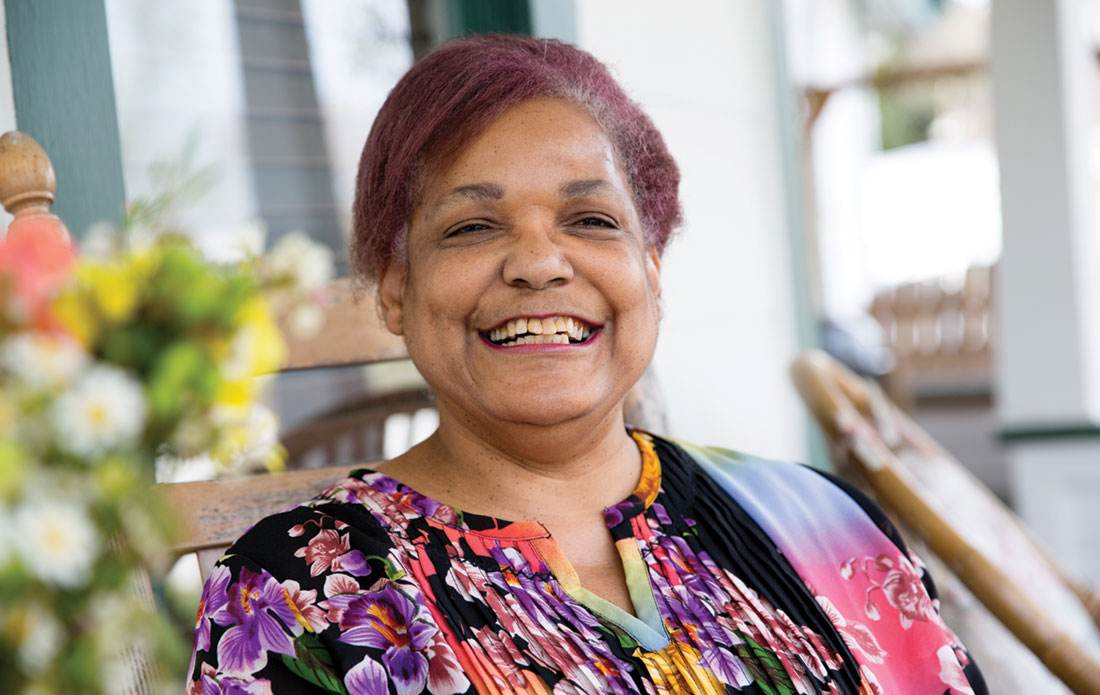 An eye-opening era in gene therapy

Pictured Above: Achromatopsia clinical trial patient Annie Joiner. She’s seen the world throughout her life in black and white until a gene therapy clinical trial gave her a first glimpse of color.

No one has looked at the colors on an iPhone with as much fascination as Annie Joiner has in the past couple of months.

That’s because the 60-year-old Annie can see the “colors” on her phone — can see any colors actually — for the first time in her life.

She doesn’t really recognize them as colors. After a lifetime of color-blindness, her brain has never tried to process such a thing before. Still, she sees them as somehow different.

And it’s world-changing for Annie.

“It’s very exciting for me,” she says.

The most common form of achromatopsia is genetic. People are born with it. It comes from a mutation in a gene that normally helps our eyes react appropriately to light. In the clinical trial, an eye surgeon injects a normal copy of the specific gene — carried by a modified and harmless virus — under the retina of the eye. The hope is that the normal gene will then help trigger the proteins that will get her eyes working more normally.

So far, for Annie, it appears to be working.

“This is a ‘one giant leap for mankind’ kind of moment. This is one therapy for a rare disease, but it is the proof of principle — that gene therapy can work. This is really miraculous. And this is really just the beginning.”

There is much work to do before scientists will know whether the achromatopsia gene therapy treatment is successful. But human gene therapy in general — in which doctors replace a mutated gene with a normal one or “turn off” the actions of a disease-causing gene — has had a run of real success over the past few years. A number of gene therapy procedures, mostly in clinical  trials, appear to effectively treat or cure a range of medical conditions, including those affecting the eye.

And Casey is helping to lead the way.

Casey is participating in more gene therapy clinical trials for eye conditions than any other center in the world. It boasts three physicians and surgeons who are international experts in inherited retinal disease; most centers have no more than one such expert.

Andreas K. Lauer, MD, Chief of Casey’s retina-vitreous division, Kenneth C. Swan Professor of Ophthalmology and vice-chair for education, is known for his success as an eye surgeon in clinical trials. In a few current national clinical trials, Casey is the only site selected to do the eye surgeries.

Casey is also becoming part of history: It is one of only seven sites in the country offering the first FDA-approved gene therapy for a genetic disease ­— a clinical trials success now available to patients.

The treatment is for the several thousand people born with a rare defect in the RPE65 gene. The mutation causes severe visual problems from infancy and often leads to complete blindness.

The treatment improved the vision of more than 90 percent of people participating in its clinical trials, with some moving from legally blind to not blind.

“This is a ‘one giant leap for mankind’ kind of moment,” says Mark E. Pennesi, MD, PhD, associate professor of ophthalmology and division chief of the ophthalmic genetics program at Casey. “This is one therapy for a rare disease, but it is the proof of principle — that gene therapy can work. This is really miraculous. And this is really just the beginning.”

Casey is among the handful of sites in the nation that will perform the procedure because of its team’s national and international reputation in gene therapy and gene therapy eye surgery.

The team expertise and experience that Casey now boasts was hardly accidental, Casey physicians say. Casey’s leadership in gene therapy is the result of the vision of David J. Wilson, MD, the Margaret Thiele Petti and August Petti Chair of Ophthalmology and director of Casey, who anticipated how important gene therapy would become in treating eye diseases. And the foundation for Casey’s gene therapy prominence was built through philanthropy: An important $1 million gift from Paul Casey eight years ago “was the spark that lit the fire,” says Pennesi.

That $1 million gift led to an additional $10 million in industry and philanthropic support for Casey physicians and scientists doing genetic therapy research.

“It does show how philanthropy can lead to a successful and thriving program,” Wilson says. “It allowed us to build a program that then led to multiple millions in sponsored research. It put us in position.”

But leaders can’t rest, which is partly why Casey has embarked on an expansion plan that includes a new building featuring an entire floor devoted to gene therapy treatment and research.

Wilson, Pennesi and Lauer each say they’re excited about the gene therapy success of Luxturna, and their optimism is further fueled by how this success could lead to better treatments for a range of eye diseases, including much more common problems like age-related macular degeneration. Scientists hope that different gene or cell-based therapies might be able to do for other conditions what Luxturna does for RPE65 disease. For example, they may be able to stop or reverse “wet” AMD, which affects more than 2 million mostly older people in the U.S.

One of those people is Zola Goodell.

Zola, a Portlander who turns 84 in April, is participating in a Casey clinical trial that is exploring whether gene therapy can treat AMD.

Zola has “dry” AMD in her right eye and the more rare “wet” AMD in her left.  In dry AMD, yellowish or white deposits form under the macula at the center of the retina, causing the macula to deteriorate. In wet AMD, abnormal blood vessels underneath the retina form and grow toward the macula, then often break and leak fluid, damaging the macula. Dry AMD progresses to wet AMD in 10 to 20 percent of people who have dry AMD. The wet AMD results in more rapid and severe vision loss.

Casey’s clinical trial is testing a treatment for wet AMD, in which corrective genes are implanted in the retina with hopes of blocking the growth of the abnormal blood vessels. Zola had the surgery to implant the genes four years ago and goes to Casey for checkups every six months. During those check-ups — which will continue as part of the trial for the next 10 years — doctors draw fluid out of her eye to measure the levels of the protective proteins that should have been triggered by the genes administered to her in surgery.

Clinical trials often require some significant ongoing commitment by participants, and volunteers like Zola — and Annie — are vital for scientific research, and for almost all medical breakthroughs. Their participation might be even more important, and notable, in trials that involve eye surgery, says Lauer.

“There’s a tremendous amount of emotional investment in coming to the decision to go ahead with such treatment,” Lauer says, “There’s risk potential with surgery — it’s not like putting in an eye drop or ointment. There’s a certain amount of trust that the patient places on the surgery team. This is a type of treatment where you need to get it right.”

One thing is certain: With the promise that gene therapy is showing, the increasing knowledge gained through clinical trials is incredibly important, Lauer says.

“My hope is that gene therapy would allow people in the future to enjoy the beauty there is in this world,” says Lauer. “Some of these people are not even born yet. Gene therapy has the possibility of being able to change families’ lives.”

For people like Annie and Zola, that’s more than enough.

Annie was the first person in the United States with her type of achromatopsia to get the treatment she received. She knew there was some risk in the trial, but “there’s always risk in anything,” she says. The reward: it’s already brought some improvement in her vision, and she believes there will be more improvement.

“My hope is that gene therapy would allow people in the future to enjoy the beauty there is in this world. Some of these people are not even born yet. Gene therapy has the possibility of being able to change families’ lives.”

But Annie says she wanted to participate for reasons beyond her own vision. Achromatopsia runs in families — often skipping a generation — and her grandson has the condition. “His vision is worse off than mine,” Annie says. “So anything that is learned from my experience might give him a chance to have improved vision.”

Zola is driven by similar hopes.

Since she had her surgery, her retina has continued to create the protective proteins that the genes were supposed to trigger. She has noticed no further decline of vision in her left eye with the wet MD, and she no longer requires periodic eye injections.

Zola knows the treatment is unlikely to reverse her wet AMD. But that’s not the point, she says.

She wanted to be part of the study because she believes helping scientists learn more about macular degeneration now may benefit someone with macular degeneration after she’s gone. She has high praise for the Casey staff and the way they have shepherded her through an “easy and informative” study experience.

“If I’ve been a part of something that makes life better for someone else, I’m delighted to do it,” says Zola. “If people don’t volunteer to do these sort of things, medicine can’t advance.”