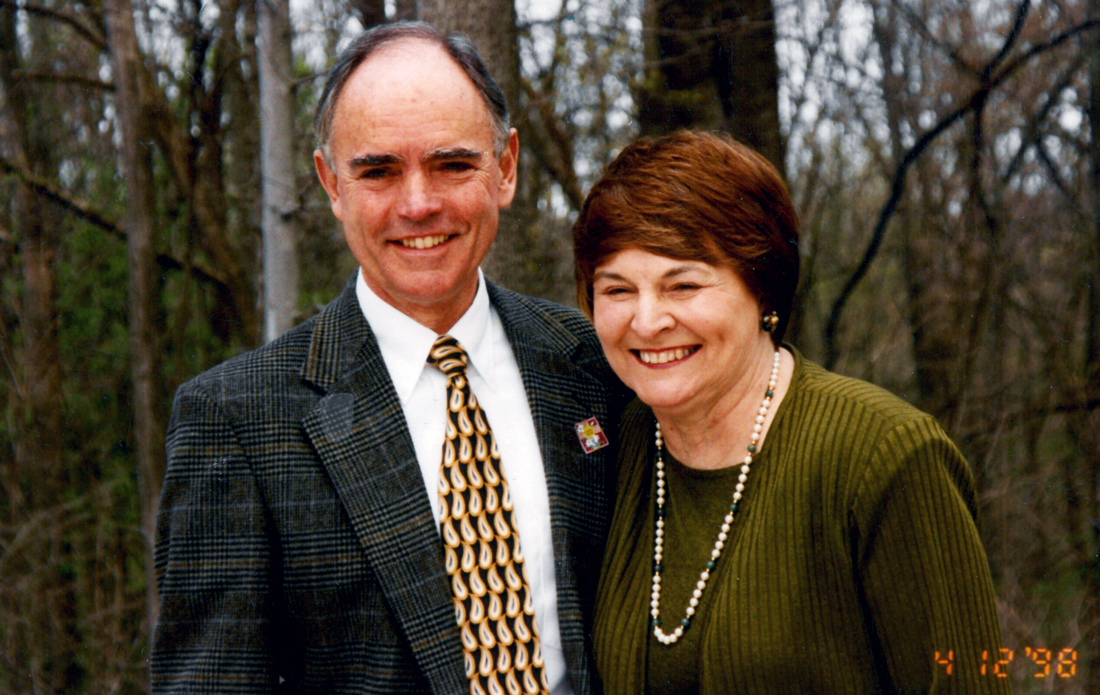 When Darlene Cain was growing up, diabetes cast a shadow over her family: 23 of her relatives had been diagnosed with or died from this devastating disease. Because of this, Darlene dedicated countless hours as a volunteer to easing the burden of diabetes for patients and their families in Oregon and across the nation.

“She saw the dark side, the complications, the challenges,” Jim Cain, Darlene’s husband of 56 years, said. “She became very sensitive to how the disease alters a normal, healthy life.”

When Darlene passed away in March 2015, the Cain family wanted to honor her lifelong work in a lasting way.

They first established the Darlene Cain Lectureship. Then, in 2019, they transitioned their gift into the Darlene Cain Endowed Professorship in Adult Diabetes Care at the OHSU Harold Schnitzer Diabetes Health Center — to keep Darlene’s commitment of providing diabetes patients with the best care possible.

“Darlene wanted to cure diabetes,” Jim said. “We want to continue Darlene’s vision and dedication to the cause. We want to help the center continue to grow and be a center of excellence for diabetes care and research.”

“We want to continue Darlene’s vision and dedication to the cause. We want to help the center continue to grow and be a center of excellence for diabetes care and research.”

Jim and Darlene’s story began in high school, when they met each other during English class of their freshman year. They were inseparable. Jim and Darlene graduated from college, got married and moved across the world to Germany for Jim’s ROTC assignment. After more than three years in Germany, they settled down in Oregon with their two sons, Jeff and Mark, and later welcomed their daughter, Jennifer.

Jim then attended the OHSU School of Dentistry after working in sales for over a year. He graduated in 1970 and practiced dentistry in Tigard, Oregon, for 36 years. OHSU remained a constant throughout the Cain family’s lives, with Jeff and Mark each graduating from the OHSU School of Medicine in the late 1980s.

Meanwhile, Darlene was a passionate volunteer and up-and-coming community leader who tirelessly worked to prevent and cure diabetes. In 1989, she founded and directed the American Diabetes Association gala auction in Portland, which she chaired for more than 20 years.

“I think at that moment she found her voice and her purpose she had looked for her whole life: to help patients find better care and raise funds for basic scientific research to find a cure,” Jennifer said.

“She always strived to do her very best with every role she took on, instilled that same virtue in her children and those around her, and applied that same passion to her work with diabetes.”

Darlene inspired countless people to join her in the fight. She served as the chair of the ADA National Board, vice chair of the ADA Research Foundation and even internationally to establish the annual United Nations World Diabetes Day. During her more than 20 years of service to the ADA, Darlene was given every local and national volunteer leadership award, and was credited with raising more than $10 million toward diabetes research, education and advocacy.

“One of mom’s favorite sayings was to ‘work hard and be the best that you can be.’ She always strived to do her very best with every role she took on, instilled that same virtue in her children and those around her, and applied that same passion to her work with diabetes,” Mark said.

Darlene’s influence also extended to OHSU, where she was an early and passionate advocate for the OHSU Harold Schnitzer Diabetes Health Center. She eventually became chair of the advisory board for the center.

“She represented benevolent, self-sacrificing intensity,” Andrew Ahmann, MD and director of the center, said. “She poured her heart and soul into fighting diabetes.”

Darlene worked closely with Ahmann to grow the center through fundraising and program development. She often donated artwork related to diabetes to brighten patient rooms, and helped to connect the center with speakers and advocates she met while volunteering nationally.

“She poured her heart and soul into fighting diabetes.”

“She was one of our leading supporters in the community, along with the Schnitzer family,” Ahmann said. “She represented the masses and knew how to get people behind a cause.”

Darlene and Jim were steadfast supporters of OHSU and gave to many areas, including the School of Dentistry, Parkinson’s disease research, the Department of Surgery and the Knight Cancer Institute. They became educated in the many ways to leverage assets for philanthropy, including gifts of real estate, stock and direct contributions from their IRA.

“Mom had a lifetime commitment to improving the care of people with diabetes,” Jeff said. “For decades, she worked with people at OHSU and recognizes their leadership in that field. She wanted to make sure everyone in Oregon had the highest standard of care for diabetes.”

The Darlene Cain Endowed Professorship in Adult Diabetes Care will create positive ripples throughout the community through the cutting-edge research and innovative care it makes possible.

“She would be proud,” Jennifer said. “We’re inspiring another generation of people who will be working in science, care and advocacy for diabetic patients, so they will have a different future than the ones her relatives knew.”