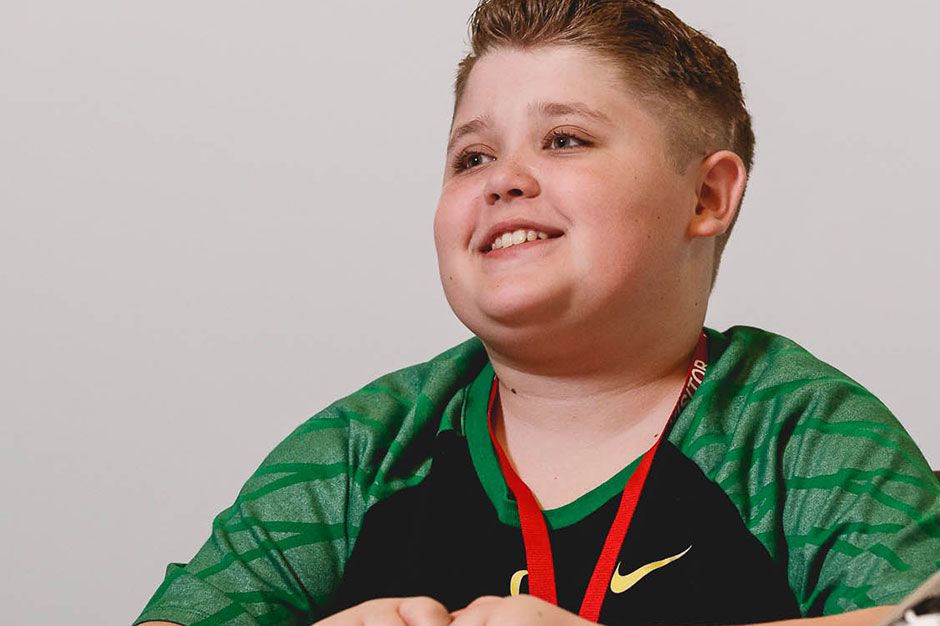 In Brody’s world, his rare brain condition is a villain he battles every day. Essentially, his body constantly generates new blood arteries that put too much pressure inside his head. As a result, Brody has endured nine complex brain surgeries.

To help him in the fight, this aspiring comic book artist dreamed up an alter ego, Generator Man, who is featured on his Air More Uptempo. “Generator Man is based on me,” he explained. “Not only can he shoot healing energy out of his hands, he also has the powers of mind control.”

Other super-powered features include a glow-in-the-dark outsole that reveals the words BE STRONG. “With all my surgeries, I’ve had to be really strong,” he explained. There’s also a giant BPM down the side, which stands for “beats per minute” as well as his initials, Brody Preston Miller.

Brody’s story has another hero to help save the day—the head of pediatric neurosurgery at Doernbecher. Her name is Dr. Lissa C. Baird, but Brody calls her Wonder Woman. “Not only does she have to use all of her powers to fix me, she even kind of looks like Wonder Woman!” he smiled.

Dr. Baird has embraced the role, and even wore the Wonder Woman pajamas Brody’s family gave her the night before his surgery. “He’s an extraordinary boy,” she said. “Throughout every treatment he has remained happy, optimistic, and determined.”

It will probably come as no surprise that this kind, imaginative kid wants to be a superhero when he grows up.

“My teacher told me I need to pick something real, but to me being a superhero is real,” he said. “You can help people who need help. You can find ways to save them.”