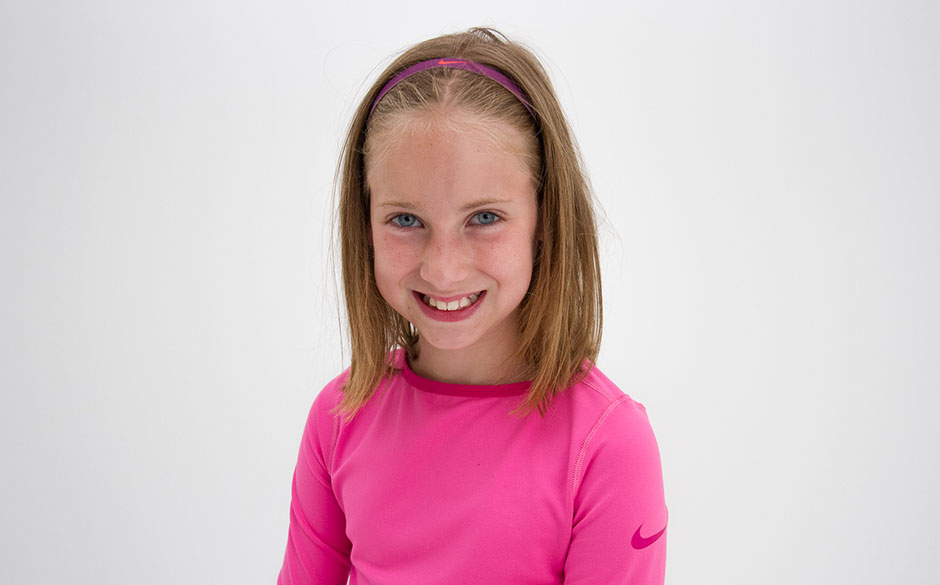 A slip of the foot at soccer practice turned an ordinary day upside down for Sophia and her family. Hanging out on the sidelines, she was practicing balancing on top of a soccer ball when she fell and hit her head.

She played through practice, but left with a terrible headache and then began to vomit. Concerned about a concussion, her parents, both doctors at OHSU, took her to OHSU Doernbecher Children’s Hospital.

An initial MRI revealed a surprising – and troubling – abnormality in her cerebellum. For a closer look, Sophia was sent for a second scan in Doernbecher’s iMRI – a highly sophisticated brain imaging technology (and the only one on the West Coast in a children’s hospital). The scan revealed a tumor. It was brain cancer. Just days before Sophia’s ninth birthday, Dr. Lissa Baird performed the surgery to remove it.

But the most important part of the designs is the message. “I want cancer gone.”

Though there’s much she doesn’t remember about her surgery and recovery because of the medications she had to take, Sophia said it was hard and sometimes painful. Her dad, Darren, calls her “tough,” but Sophia shrugs off the praise. “I suppose,” she said.

Now 10 years old, Sophia has made a complete recovery, and these days is most concerned with improving her technique in swim lessons so she can try out for swim team. She loves perfecting recipes for “slime” with her friends, and will start fifth grade this fall.

Sophia has always had an interest in clothes and fashion and was excited to be chosen for the Doernbecher Freestyle program to help design cancer awareness uniforms for the Oregon Ducks. “The shoes and fan gear are definitely something I would buy and wear to school or to soccer,” she said.

But the most important part of the designs is the message. “I want cancer gone,” she said.

That wish is reflected in her drawing of the Oregon Duck stomping out cancer, featured on the jersey and apparel. She also redesigned the “Oregon” logo, replacing the second “O” with a yellow childhood cancer awareness ribbon.

She thought about how the designs would come together, and got some good advice from her new friend, Oregon offensive lineman Tyrell Crosby. “He’s really nice. Now I’m an even bigger football fan!” she said.

To cap it all off, Sophia designed the helmet. She wanted it to be blue – her favorite color, and the color of the sky. But the end result doesn’t merely match the sky, it mirrors it. The silvery helmet reflects the sky above – a tweak to Sophia’s original concept suggested by the Nike design team. “I liked it!” she said. “I thought it looked cool and I like that the uniform all matched, but the helmet stood out.”