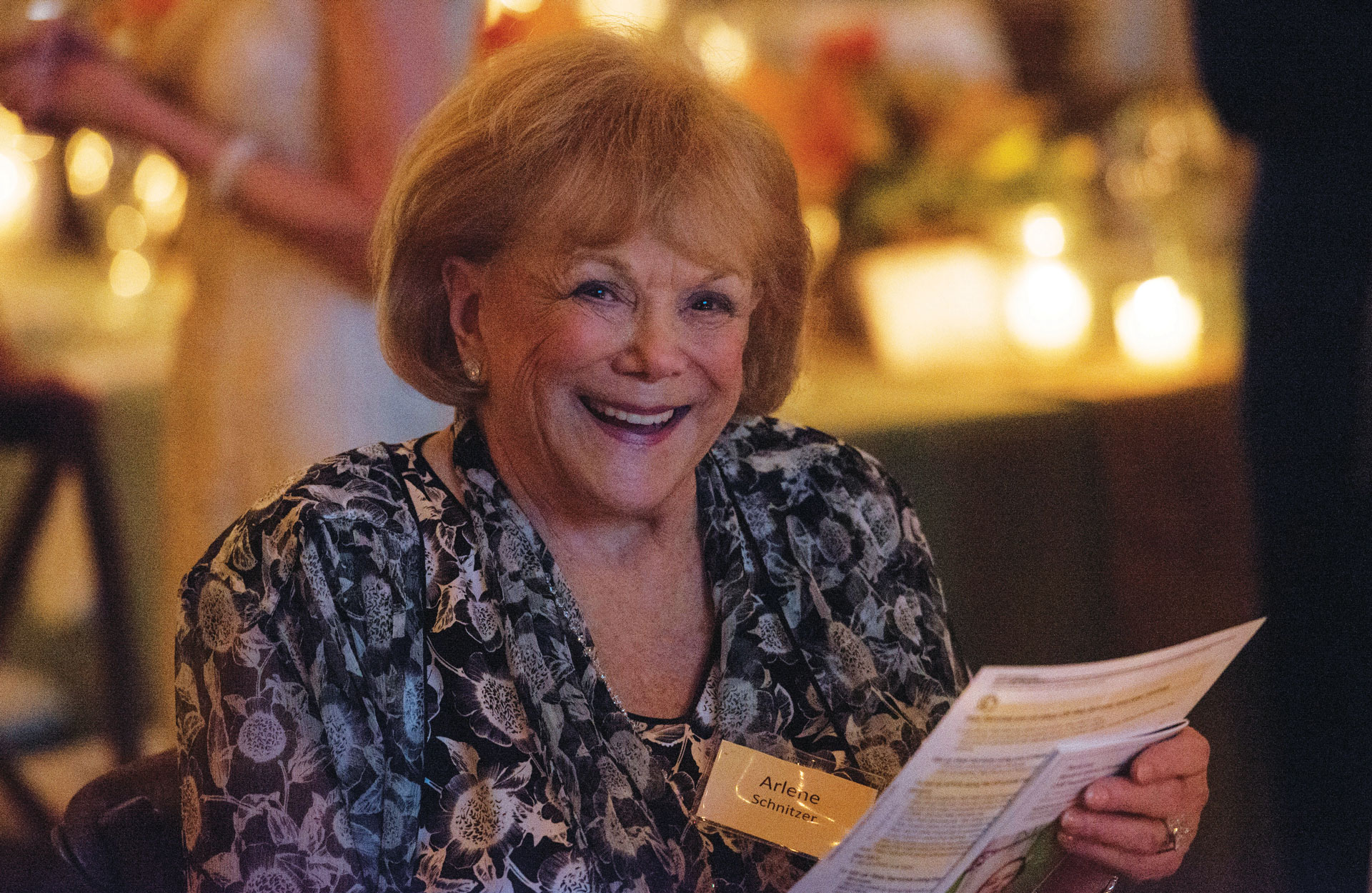 “She always said, ‘If you’re thinking something, we need to discuss it when everyone’s in the room. I don’t want to finish a meeting and see people whispering in the parking lot.’ But no one ever needed to wonder what Arlene thought,” said Barb Hall, vice president and executive director of the Harold & Arlene Schnitzer CARE Foundation. “She’d tell you.”

Portland would not be the Portland we know without the legendary philanthropy of Arlene Schnitzer. Although a lifetime patron of the arts, she also donated to a wide range of organizations, including the Oregon Historical Society, Mittleman Jewish Community Center, the Boys and Girls Club, Portland Japanese Garden, and Meals on Wheels. She, along with her husband Harold Schnitzer, gave generously to OHSU, helping establish the OHSU Center for Women’s Health and the OHSU Harold Schnitzer Diabetes Health Center.

“It is just about impossible to measure the breadth of the Schnitzers’ influence. Arlene’s commitment to giving, and to encourage others to support Portland’s nonprofits, has made a huge impact on the health and quality of life in our community. Her work has transformed so many lives,” said Matt McNair, president of the OHSU Foundation.

Arlene felt strongly about making our community as healthy as possible. In particular, she believed women’s health was different than men’s health — and something needed to be done about it. “There ought to be a place,” she’d say to OHSU Foundation board member Julie Neupert Stott, the founder and owner of Julie Neupert Interior Design. The two of them collaborated to host events to support the founding of the OHSU Center for Women’s Health.

“My mother believed nothing is more important than our health. And she understood it was often more complicated for women to get full-service health care, so when she learned about OHSU creating a women’s health center, she helped lead the charge,” said Arlene’s son Jordan Schnitzer, president of Harsch Investment Properties.

Arlene’s work with the Center for Women’s Health led the Schnitzers to found OHSU’s Harold Schnitzer Diabetes Health Center in 2007. They created the center with the belief that anyone with diabetes could access top health care resources, regardless of their economic status.

To Arlene, philanthropy wasn’t simply about writing a check: It meant involvement. Support meant developing ideas as well as funds. “Arlene never met a problem she didn’t want to fix. She naturally wanted to give back: It’s just who she was. You walked away from her a better person,” Hall said.

Arlene pushed back against the idea that charity should be anonymous. She gave not for her own name recognition but instead to inspire others.

“If you have extra, give it back,” she’d say. It needn’t be heaping sums; it could be whatever you could, and it would make the community a better place.

“Together my parents were quite a partnership, in their marriage and in their philanthropy. They always believed the riches of a city should be its citizens. My parents realized the joy they got from giving back and encouraging others to do so as well,” said Jordan.
Although her name seemed bigger than life, Arlene was down to earth. When you talked to her, you felt like no one else was in the room: You’d always have her full attention and her boundless energy that lasted long into the night.

“She naturally wanted to give back: It’s just who she was. You walked away from her a better person.”

She was a fan of gifts: both giving and receiving. She loved unwrapping any gift, even a drugstore package of Hershey’s kisses. In fact, she preferred cheap candy over gourmet selections; when gifted fancy chocolates, she gave them away. And she was a thoughtful gift-giver; one holiday season, she bought a copy of Elizabeth Taylor’s book on jewelry for everyone on the women’s health center fundraising committee and wrote a personalized note in each.

While Arlene was known for her big-ticket donations, it was the smaller-scale gifts that meant the most to her. She knew a family with a child in a wheelchair. As the child got older, it got difficult to bring them up the stairs to and from their home. When Arlene heard about this, she immediately paid for a ramp to their house and a handicapped bathroom.

“If I can help one kid have a better day, I’m okay with that,” she’d said.