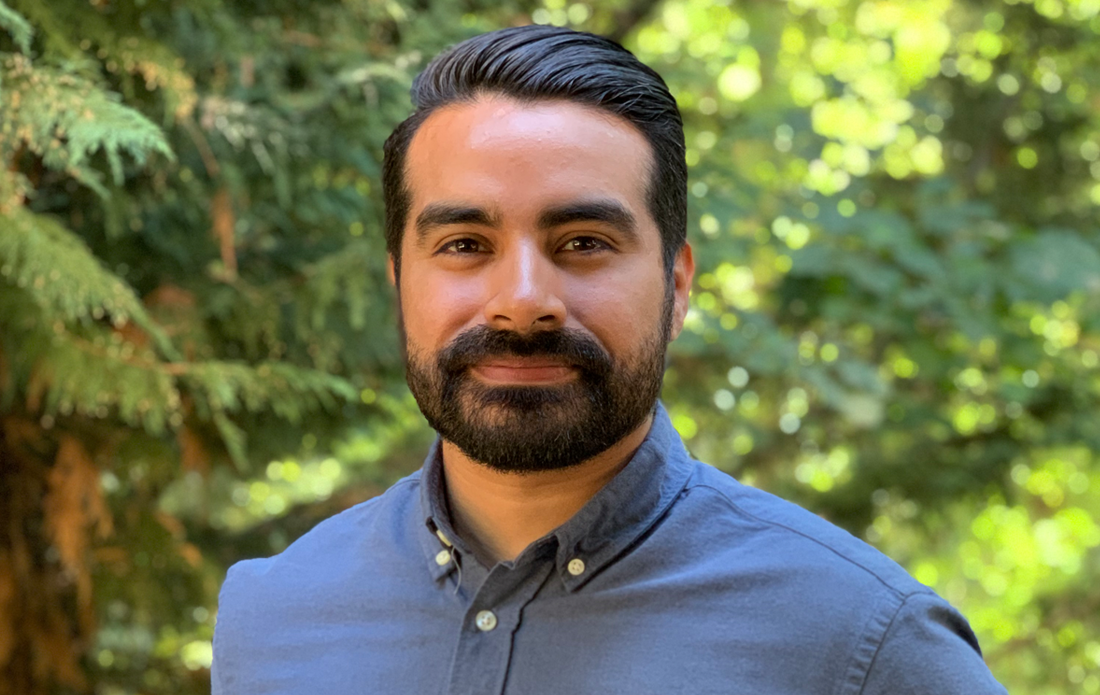 In the 1940s, a young Mexican immigrant named Samuel Martínez Solano arrived in Oregon to do agricultural work during the labor shortage of World War II. Living conditions were poor, the work was exhausting, and access to health care was practically non-existent. But Samuel was determined to create a better life for his children and the generations that would follow.

Today, his great-grandson Armando Jimenez is honoring Samuel’s legacy by helping to eradicate the health disparities found in underserved communities. And he’s using his education from OHSU to do it.

Growing up in Hillsboro, Oregon, Armando was one of four boys raised by a single mother who often worked three jobs to make ends meet. “The older I got, the more aware I was of the sacrifices she would make to ensure that we had what we needed,” he said.

After high school, Armando headed to college, majoring first in performing arts, then in business. Neither really seemed to stick — then an advisor suggested public health.

“The more I learned about it, the more I started to realize how deeply public health is ingrained in everything we do as a society,” said Armando. “It was pretty fascinating.”

Connecting to his past

After receiving a bachelor’s degree in Community Health Education, Armando spent six years working for Salud, a mobile health program that supports migrant workers and their families in the wine industry. Given his family history, the experience resonated with him deeply.

“Like my great grandfather, so many of them were making huge sacrifices so their kids could have a better life,” he said. “Having a direct connection to the people I was impacting and seeing the need and level of disenfranchisement for these populations really inspired me to do something about it at the organizational level.”

“Having a direct connection to the people I was impacting and seeing the need and level of disenfranchisement for these populations really inspired me to do something about it at the organizational level.”

In order to make a meaningful impact, Armando knew he needed to learn more about things like program planning, curriculum development, health policies and behavioral theory. So he decided to pursue a Master’s in Public Health at OHSU.

“OHSU is such an authority in public health, and I’d heard nothing but good things about it from my colleagues,” he said. “I also thought that it would be a tremendous opportunity to make local connections that would really facilitate partnerships in the future.”

The experience more than lived up to his expectations. “The instructors are amazing — they really encourage students to dig in and take a deeper look at a lot of things that are givens in public health. It really opened my eyes to all the different ways that we can make an impact.”

Armando also says he’s grateful for the support of his faculty advisors along the way. “The big thing across the board is accessibility and availability,” he explained. “These are people with a lot on their plate, but they always make time for you. Coming in, you don’t always know what you don’t know, but they were able to ask the right questions and provide the little nudges I needed to guide my journey.”

“I want people to know that when you invest in a student’s education, you help more than the student — you help the communities they’ll serve one day.”

It’s a journey that almost didn’t happen. “Right around the time I was applying, my wife stopped working, so finances were a big concern,” he said. With a young son and a baby on the way, Armando was prepared to put his educational ambitions aside for the sake of his family. Then he learned that he was a recipient of the Dean’s Scholarship.

“Suddenly, I didn’t have to choose between my education and supporting my family,” he said.

Funded by the generosity of private donors, the Dean’s Scholarship opens doors for students who might not be able to afford higher education otherwise — many, like Armando, are the first in their family to go to college. Armando said the impact of scholarships like these goes far beyond the students who receive them.

“I want people to know that when you invest in a student’s education, you help more than the student — you help the communities they’ll serve one day. We need the voices of the underrepresented and the underserved at the table as we create better public health policies. By helping to put them there, you create an enormous ripple effect of positive change.”

“We need the voices of the underrepresented and the underserved at the table as we create better public health policies. By helping to put them there, you create an enormous ripple effect of positive change.”

Armando often reflects on the sacrifices his great-grandfather and mother made to pave the way for him. “I’m determined to do the same for my children,” he said. “Sometimes, when I’m trying to juggle school with my full-time job, I’ll ask myself, ‘Is this humanly possible?’ Then I think about my kids, and the answer is always yes.”