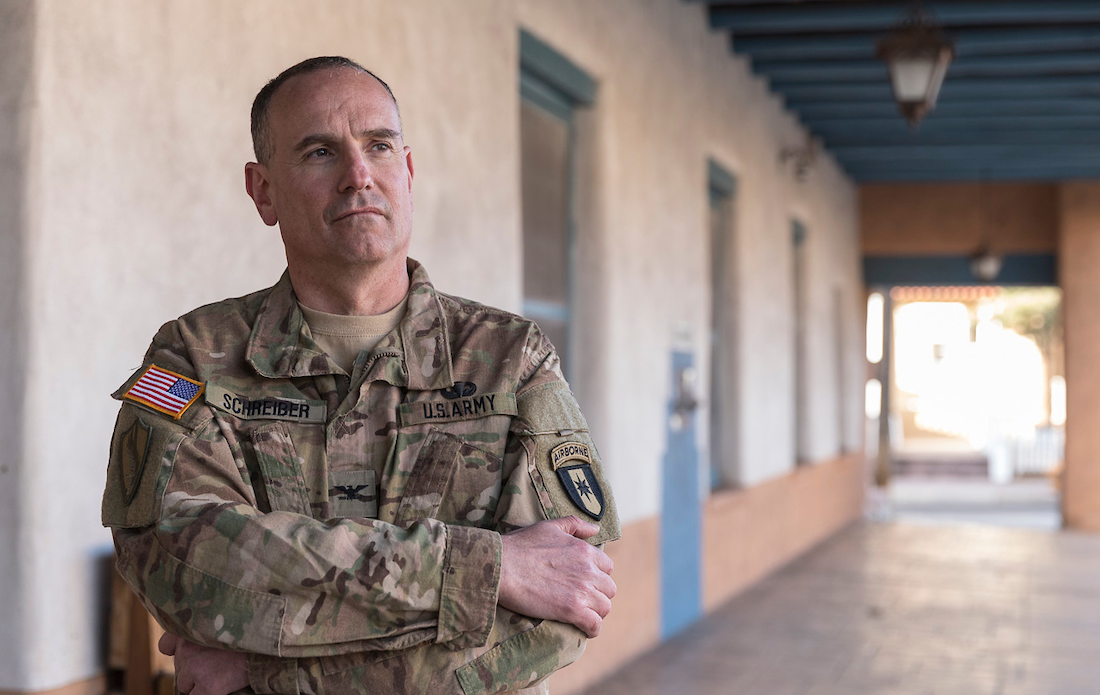 Since the day he was born, Martin Schreiber recalls his mother saying one thing, over and over: You’re going to be a doctor.

He fulfilled that dream — and then some. Schreiber has since built an illustrious career in medicine and the military, shaping how the two can influence each other.

Schreiber’s inspiration to pursue a career in medicine was inspired by his mother’s upbringing and her constant encouragement.

His mother escaped Poland during World War II and spent her childhood in Siberia cutting down trees for bread and water with her parents and two brothers. She always had a strong desire to become a physician, and eventually headed to the Middle East where she graduated from the American University in Beirut, Lebanon.

From there, she came to the United States to pursue a career in medicine. She was later diagnosed with an aggressive form of breast cancer. Schreiber’s mother died at 42, when he was eight.

“I achieved the dream my mother had for her life and her children.”

Growing up in Cleveland, Ohio, Schreiber didn’t have much. He saved money by collecting cans on the beach and living on a bare bones diet of chicken hearts and livers. His resourcefulness left him with some money to attend the University of Chicago where he earned his bachelor’s degree in chemistry.

Upon graduating from college, Schreiber signed up for the Army Reserve and returned home to Cleveland — to study medicine at Case Western Reserve University.

“I achieved the dream my mother had for her life and her children,” Schreiber said.

Schreiber met his future wife while in medical school, and they began their medical careers together in the Pacific Northwest. He became a surgeon specializing in trauma and critical care, and began his career at OHSU in 2002. Throughout his time at OHSU, he has served as the director of the trauma research laboratory. OHSU is internationally recognized in trauma research, and was identified in a recent survey by the American College of Surgeons as one of the top five trauma research programs in the nation.

Schreiber also remained in the Army Reserve since he first signed up in 1984, and is currently an active U.S. Colonel.

When the United States went to war in Afghanistan and Iraq, Schreiber volunteered for active duty and deployment. He was deployed three times, serving in Iraq in 2005 and Afghanistan in 2010 and 2014. He served in several different roles, including chief of surgery for the military hospital in Tikrit, Iraq, and the joint theater trauma system director in Bagram, Afghanistan.

“The military has been the most career enhancing experience I’ve had. It’s shaped the entire way I care for patients and my entire research program.”

“I had extensive exposure to what was going on in the field,” he said. “Many people like me —reservists — were being deployed, getting this experience and translating it back home.”

These deployments completely changed Schreiber’s approach to medicine and research. He brought back concepts and techniques that helped shape the way physicians managed people in the civilian world, like tourniquets and early hemorrhage control.

“The military has been the most career enhancing experience I’ve had,” Schreiber said. “It’s shaped the entire way I care for patients and my entire research program.”

The intersection of research

Schreiber’s research ranges from battlefield surgical care to traumatic brain injuries. Often, it covers the intersection between the civilian and military worlds. His CV is 83 pages long, filled with a list of more than 300 publications.

His most recent article — soon to be published in the Journal of the American Medical Association — focuses on whether tranexamic acid given to patients with moderate to severe traumatic brain injuries could improve their outcomes.

Traumatic brain injuries are most commonly the result of motor vehicle crashes, falls and assaults. After a trauma, brain injuries are the leading cause of death, and there is currently no effective treatment other than supportive care.

Tranexamic acid, also known as TXA, is a drug given to patients to help reduce blood loss, primarily in cardiac, spine or orthopedic surgeries. It’s a hot topic in the surgical medical community, largely because of a 2010 research publication in The Lancet that showed reduced mortality rates in patients who were at risk for bleeding and were treated with TXA.

“This could help people survive.”

Schreiber wanted to learn more: Could a patient’s outcome improve if given TXA within two hours of a brain injury? In 2015, he and his team, which included Susan Rowell, MD, associate professor of surgery at Duke University School of Medicine, set out to find the answer. The project was made possible by funding from the U.S. Army Medical Research and Material Command, the National Heart, Lung, and Blood Institute, the American Heart Association and their sister organizations in Canada through the Resuscitation Outcomes Consortium.

Their results showed that brain injury patients who received two grams of TXA shortly after their initial injury had a mortality rate of 18 percent, compared to a 27 percent mortality rate in patients who received placebo or one gram of TXA in the field, followed by another gram of TXA over eight hours. They found that both time and dosage of TXA matter.

Their findings have already resulted in changing the military’s protocol for TXA use. The committee on tactical combat casualty within the U.S. Department of Defense changed their guidelines to give injured soldiers in the field 2 grams of TXA for hemorrhage or brain injury.

“This could help people survive,” Schreiber said. Schreiber’s next steps are to secure funding to create an intramuscular injector of TXA for soldiers to carry while in the field for use on themselves or someone else, and to focus on how TXA helps improve outcomes for patients with traumatic brain injuries.

Schreiber’s research is one part of a collective effort to coordinate research across OHSU, the Portland Veterans Affairs Hospital and the region in order to better leverage research expertise and improve patient outcomes.

The new Donald D. Trunkey Center for Civilian and Combat Casualty Care was created to help bridge connections among the broader community of trauma researchers so they can continue to advance innovative trauma research.

The new center is directed by Schreiber, and embodies the deep connection between trauma care at OHSU and service in the U.S. military.

“It is an immense honor for me to lead this center and to carry on his legacy at such a crucial time. I am eager to see all that we can accomplish on behalf of our patients, and I am grateful for the opportunity.”

The center was named for Trunkey, a Colonel in the U.S. Army Reserve during the Gulf War’s Operation Desert Storm in 1991, and a former chairman of OHSU’s Department of Surgery. Trunkey’s influence on trauma care was not confined to the military sphere, but was based on a persistent advocacy for optimal treatment of injured patients. Researchers within this new center have a shared focus of the crossover between military and civilian care, like Schreiber’s own work with TXA.

“The center will continue the tradition of pursuing excellence in trauma care, research and education started by Dr. Trunkey by capitalizing on and synergizing all current trauma related resources available in the Northwest,” Schreiber said. “It is an immense honor for me to lead this center and to carry on his legacy at such a crucial time. I am eager to see all that we can accomplish on behalf of our patients, and I am grateful for the opportunity.”