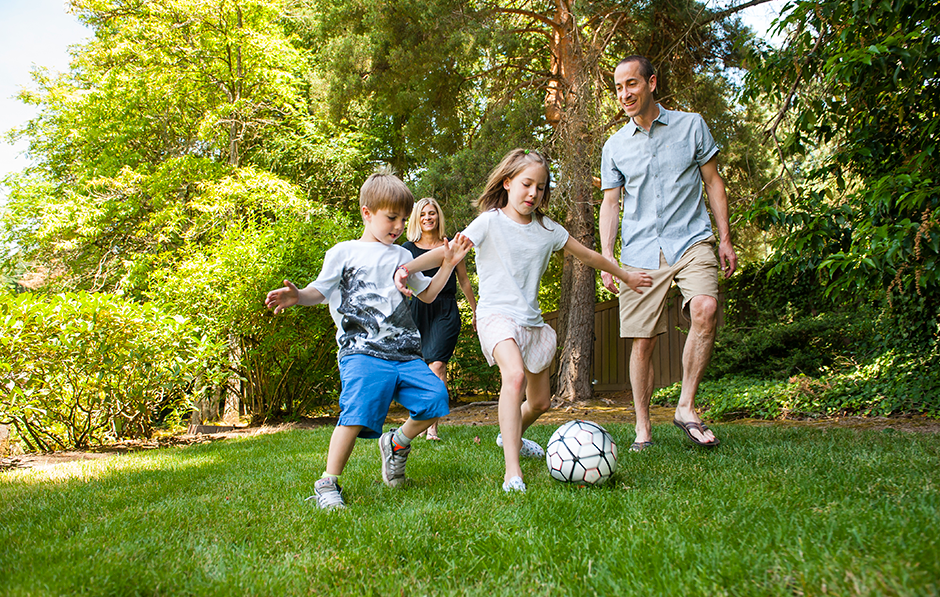 It all started last spring when Sophia Malinoski forgot to wear her mittens to soccer practice. It was cold, so she kept her hands in her pockets when she attempted to balance atop her soccer ball. And that’s why, when she lost her balance, she fell hard on her head  — no hands to break her fall.

Riding home with her dad Darren, she complained of a terrible headache and threw up several times in the car. Darren called Sophia’s mom, Sehra, to confer. He was close to a hospital where Sophia could be scanned for a concussion. But both Sophia’s parents are doctors at OHSU. Darren Malinoski, MD, is a critical care/trauma surgeon in the V.A. Medical Center and OHSU; Sehra Sampson, MD, is a physician in the Emergency Department at Doernbecher. They chose to drive Sophia the extra distance to Doernbecher. And that decision may have saved her life.

“I told Darren to head up the hill to Doernbecher, because they do what’s called a quick brain MRI for head injuries,” said Sehra. Doernbecher is currently the only hospital in Oregon offering this type of scan for pediatric head injuries.

Sophia received her scan that night, and a preliminary review found it to be normal. Darren took her home and all seemed well. The next day, Sehra took a call at work from the attending neuro-radiologist who was reviewing the previous night’s scans. He wanted to report a discrepancy on an MRI result; he was seeing an abnormality in the cerebellum that was not previously noticed.

“I realized right away that it was Sophia’s scan. My stomach dropped,” said Sehra. “I told him, ‘that’s my daughter.’”

“While all of this is happening, Darren and I are asking ourselves, is Doernbecher the right place to have the surgery? We wanted to explore all of the options nationwide. We started calling our colleagues across the country. We discovered that we were incredibly lucky — Doernbecher had the only iMRI on the West Coast and Dr. Baird was considered one of the best pediatric neurosurgeons anywhere. It was a relief to know that Sophia was in good hands, right here in Portland.”

Sehra Sampson, MD, physician in the Emergency Department at Doernbecher and Sophia’s mom

Sehra quickly phoned Dr. Lissa Baird, a pediatric neurosurgeon, who reviewed the scans immediately. Dr. Baird thought she saw a mass — something beyond a contusion from the fall. They decided to bring Sophia in that day for another series of scans on Doernbecher’s new intraoperative magnetic resonance imaging suite. The iMRI suite had only been operational for a few weeks, but it was one of the most important new technologies to ever come to Doernbecher. The iMRI’s arrival would not have been possible without philanthropy, including a generous gift from the family of Arnold and Leona Poletiek.

“Having the iMRI was key. We were able to see fairly quickly that there was a tumor, and move forward with a treatment plan,” said Dr. Baird.

The scan was also evaluated by a neuro-radiologist, Ramon Barajas, MD, and a neuro-oncologist, Kellie Nazemi, M.D. “If Sophia had a CT scan to evaluate her concussion, it is very unlikely the tumor would have been seen due to limitations of that type of scan. The decision to go to Doernbecher for the quick brain MRI gave us the gift of finding this tumor early,” said Sehra. The team decided to schedule surgery — quickly — just days before Sophia’s 9th birthday.

“While all of this is happening, Darren and I are asking ourselves, is Doernbecher the right place to have the surgery? We wanted to explore all of the options nationwide. We started calling our colleagues across the country. We discovered that we were incredibly lucky — Doernbecher had the only iMRI on the West Coast and Dr. Baird was considered one of the best pediatric neurosurgeons anywhere,” said Sehra. “It was a relief to know that Sophia was in good hands, right here in Portland.”

“Sophia’s tumor was located next to the brain stem, an area that has critical neurological function,” said Dr. Baird. “It was a technically difficult tumor to remove, because it was wrapped around some important blood vessels. We were able to use the iMRI to check our progress in the middle of surgery, and saw on that iMRI there was still a small bright spot left behind a blood vessel. We went back in to take that little piece out. And then finally we obtained another iMRI that confirmed the entire tumor was completely out. At that point, before she’s even awake, we know she’s going to be OK.”

If the tumor had not been diagnosed and removed, it would have slowly increased in size over months and years until it started producing symptoms, or it became so big it blocked spinal fluid, a potentially life-threatening condition.

“I trained with an iMRI. It changes the way you approach things. It’s an enormously powerful surgical tool. The fact that Doernbecher was building an iMRI was a factor in my coming to Doernbecher from Boston Children’s Hospital,” said Dr. Baird.

The Malinoski family feels deeply fortunate for Dr. Baird’s presence at Doernbecher — and for the fact that the iMRI suite had been set up two weeks prior.

Sophia was only out of school for two weeks, and her recovery is now complete. She remembers the good and the bad from being in the hospital. The medicine “tasted really bad” and it hurt when they took the tape off her skin from the IV; but on the other hand, she “really liked her nurses” and “Dr. Baird didn’t have to shave my hair!” Her tumor was a grade one glioma, which means it is unlikely to recur. Sophia is already playing soccer and she’s excited to start fourth grade at Ainsworth Elementary in the fall.

“We were lucky because of her fall, lucky that we found [the tumor] so fast, and lucky that we got the care we did. So many things went right,” said Sehra.

Let’s do amazing things for kids.