The determination of Clementine | OHSU Foundation
Skip to content 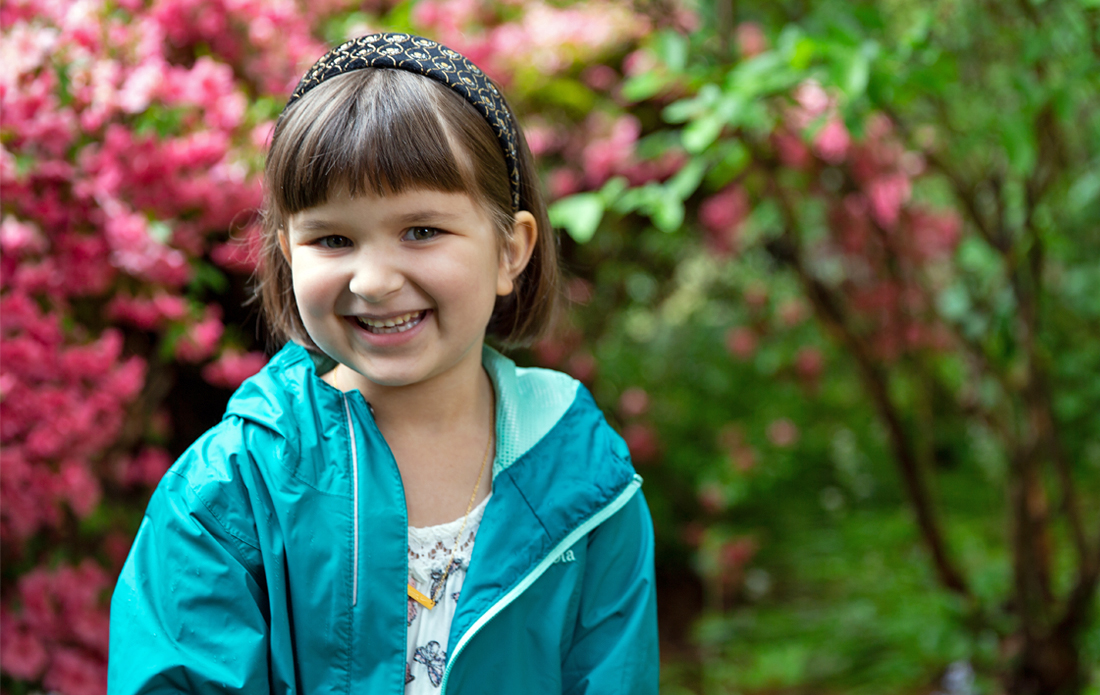 The determination of Clementine

Clementine had just celebrated her sixth birthday. A week later, she complained of a headache at school, skipped lunch and fell asleep with her head on her desk. Clementine’s dad assumed it was a bout of flu, so he picked her up with plans to visit her pediatrician that afternoon. On the drive home, Clementine slumped forward in her seat, unconscious.

“That’s when I knew we needed help right away,” Ric Shewell, Clementine’s dad, said. “I pinched her knee to try and wake her up but it didn’t work. She wouldn’t wake up.”

Ric and Joanna, Clementine’s mom, rushed her to the nearby urgent care, where doctors noticed that Clementine had a blown pupil, a dangerous sign of potential built-up pressure inside the brain.

Expedited care was crucial to Clementine’s survival. She was transferred via ambulance to OHSU Doernbecher Children’s Hospital, where CT scans revealed she was suffering from the hemorrhage of abnormal blood vessels in her brain called an arteriovenous malformation – the size of a kiwifruit.

“We didn’t know what was going to happen, but, in that moment, Dr. Baird was like a superwoman,” Joanna said.

Brain AVMs are tangles of abnormal blood vessels that, when ruptured, take blood from important parts of the brain. With less oxygen flowing to and from vital organs, Clementine was at risk of suffering a stroke, permanent paralysis and impaired vision or language.

“We didn’t know what was going to happen, but, in that moment, Dr. Baird was like a superwoman.”

“I arrived at Doernbecher with Lewis, Clementine’s three-year-old brother, just in time to see them wheel her past us – unconscious – surrounded by a whole team of people,” Joanna said. “Someone brought us a bunch of papers to sign. We consented to everything, and then they ran with her down the hall.”

Led by pediatric neurosurgeon Lissa Baird, MD, the surgery team removed part of Clementine’s skull to relieve pressure on her brain. Because Doernbecher is equipped to handle emergencies such as this, the physicians were able to get Clementine into the operating room quickly – a critical point to save Clementine’s life.

“We didn’t know what was going to happen, but, in that moment, Dr. Baird was like a superwoman,” Joanna said.

Dr. Baird also cleared Clementine’s AVM while performing the craniectomy, allowing her time to recover without requiring a second surgery. But because of the size and location of her bleed, the Shewells were told that vision impairment, speech difficulties and some paralysis on her right side were included in the best-case scenario.

Physicians cleared Clementine after her post-surgery MRI and angiogram, where they found no strokes, no additional AVMs and no other bleeding. She had diminished language and motor function, which affected her speech and movement on her right side, but it turned out to be better than the best-case scenario originally given to them.

“They took such good care of Clementine at Doernbecher,” Joanna said. “Her recovery would have been really different if we had ended up somewhere else. Dr. Baird had the perfect skills and foresight to know exactly how to treat our daughter. The sweetest surprise was that Dr. Baird saved Clementine’s hair by quickly braiding it before surgery.”

Clementine is a strong, determined and bright girl. And she loves science.

In the days and weeks following surgery, she wanted to know exactly what happened to her – and how to heal and restore the right side of her body. She was determined to bounce back to her pre-surgery state.

After spending eight days at Doernbecher, Clementine headed to inpatient physical therapy at a local hospital, where she met every challenge with enthusiasm and determination.

“They took such good care of Clementine at Doernbecher. Her recovery would have been really different if we had ended up somewhere else.”

“They took such good care of Clementine at Doernbecher,” Joanna said. “Her recovery would have been really different if we had ended up somewhere else.”

When her neuropsychologist indicated that learning to read would help improve Clementine’s speech processing and expression, she wanted to learn how to read immediately. When she began walking again, instead of resting, Clementine asked to go on walks between her therapies to build up her strength. She kept telling her mom that she was “only going to be able to walk by walking.”

Today, Clementine is feeling “good as heck” with full mobility and is back to doing all of the things she loves: riding her bike, ballet, playing with her little brother and coloring pictures with her right hand. She’s expected to start first grade without missing a beat.

Clementine will continue her outpatient therapies to help improve her speech, but they’re becoming less frequent as she progresses.

“If you would have told me this is where we’d be two to three months out,” Ric said. “I never would have believed you.”

Your support makes it possible to provide leading-edge care for all kids and their families when they need it most.