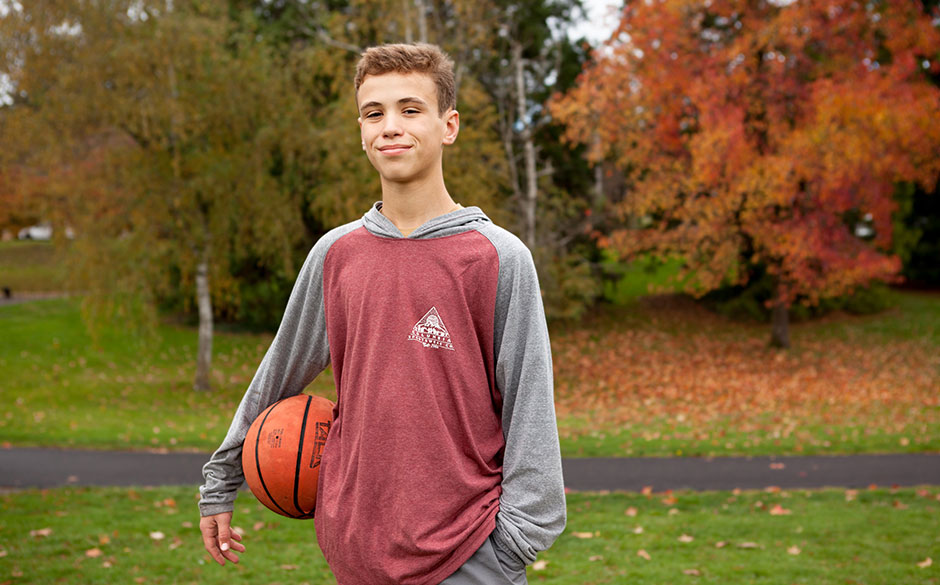 There were only four doctors in the small Idaho town where Jennifer Williamson lived in 2003. So when her infant son, Logan, stopped eating, she took him to their family physician. Logan was losing weight and his doctor noted he had failure to thrive. The question was: why? A trip to the hospital in Boise revealed that Logan was in full-blown kidney failure.

To this day, there is not a single pediatric kidney specialist that resides in the state of Idaho. Dr. Randall Jenkins, based in Portland and now the Y. B. Talwalkar Professor in Pediatric Nephrology and head of Doernbecher’s Division of Pediatric Nephrology, travels there almost weekly to provide care for Idaho’s children.

By the time Dr. Jenkins was brought in to oversee his case, Logan was in critical condition and needed immediate lifesaving treatment. Logan was transferred by life flight to Portland.

Logan was diagnosed with a rare genetic disorder called primary hyperoxaluria, or oxalosis. His liver does not produce an enzyme that is necessary to break down and eliminate a substance called oxalate from the body. The result is a life-threatening build-up of calcium salt crystals in the kidneys and elsewhere, including the eyes, bones and heart. At the time of Logan’s diagnosis, there were only eight known active cases in infants in the world.

When Jennifer and her baby began their journey, with three-year-old sister Abbie in tow, the outlook was not good. “I had no hope of him living through the night,” Jennifer recalled. “As I was being jostled around in the tail of the plane, I thought we were traveling to Portland to postpone the inevitable.”

“I remember Dr. Jenkins asking me, ‘Do you have any questions?’ I asked if Logan was going to die. Dr. Jenkins’s answer was: not today.”

At Doernbecher, Logan was met by the team of specialists that would not only change the course of his life, but of his mother’s as well.

“I remember Dr. Jenkins asking me, ‘Do you have any questions?’” Jennifer said. “I asked if Logan was going to die. Dr. Jenkins’s answer was: not today.”

Logan would need both a kidney and a liver transplant to survive.

“Dr. Jenkins calmly described the plan to me,” said Jennifer. “We had to begin aggressive dialysis to rid his body of the accumulated crystals that were damaging his organs. We couldn’t go home to Idaho. We would have to stay in Portland.”

It was the beginning of a course of rigorous treatment that included dialysis for up to 100 hours per week. Eventually, as Logan’s body rid itself of the crystals, he began to grow and gain weight. “His first smile was in the hospital,” said Jennifer.

By the time Logan was one year old, he was big enough and strong enough for the needed liver and kidney transplants. Only two hospitals in the United States were equipped to transplant patients with Logan’s rare condition, so he and Jennifer flew to Stanford University Hospital for the surgery. Although he was supposed to receive a liver and a kidney from a deceased donor at the same time, tests revealed that only the liver was a suitable match. Initially, the liver transplant was a success and Logan’s condition improved almost immediately. However, a series of setbacks turned this once-promising milestone into a new nightmare. A blood clot was impeding Logan’s liver function – and on top of that, he developed a dangerous fungal infection.

Sicker than ever, Logan was running out of time. The new liver would not last, and a new donor had not materialized. After advocating strenuously with the transplant team, Jennifer was permitted to become an organ donor for her son. Transplant surgeon Carlos Esquivel performed both procedures, removing a section of Jennifer’s liver and transplanting it into her son.

“He saved us,” said Jennifer.

After 14 hours of surgery, Logan had a second chance at life. Within a day, his condition had, once again, dramatically improved. “It was amazing,” said Jennifer. “He bounced back so fast. I have pictures of him smiling with the respirator in – he felt that good.”

The successful liver transplant was performed in October 2004. By June, Logan would have a new kidney – also donated by his mom. The surgery was performed at OHSU by pioneering renal transplant surgeon Dr. John M. Barry. “He’s an amazing man,” said Jennifer. “An absolute godsend.”

“The kidney transplant marked the end of this massive ordeal that we’d been through,” she said. “We were finally going to be able to move on and have normal lives — and Logan wouldn’t have to live his childhood in the hospital anymore.”

As a toddler, Logan still had a lot of catching up to do. Kids on intensive dialysis aren’t able to reach the typical developmental milestones. Logan would have to learn to walk, eat and drink. By the time he started preschool, he was all caught up and running around just like any other kid.

“I can tell you,” said Jennifer, “that life goes on. And Logan has a great life.”

Today, Logan is 14 years old and can be found playing video games, spending lazy Saturdays relaxing with his family, and playing outdoors with his younger brother. He’s come to terms with the fact that he can’t play contact sports – football and wrestling are out – and has taken up basketball and running track with his middle school team.

Looking back, Logan said, “I don’t remember a lot from when I was little. But what matters is – I’m still here.”

Because Logan needs access to ongoing care that is not available in Idaho, Jennifer moved her family to Portland after the kidney transplant. “We have everything we need right here,” she said. “We are lucky that we don’t have to fly all over the country to seek treatment for this rare condition.”

Just this past summer, Logan visited OHSU Casey Eye Institute so a specialized team could fix damage formed around the crystals in his eyes. It’s the same process performed on those suffering from macular degeneration, an area in which the Casey Eye Institute is a global leader.

Jennifer was so inspired by her family’s experience at Doernbecher that she left behind her career as an elementary school teacher and began working as a research assistant for Dr. Jenkins, soon after their move to Portland. The two worked together for nine years, and traveled back to Idaho frequently.

“Working at OHSU is incredible,” she said. “I will never be a person who dreads coming to work. Every day you feel like you made a difference.”

Your gift ensures that Doernbecher’s leading-edge care will always be there when it’s needed.