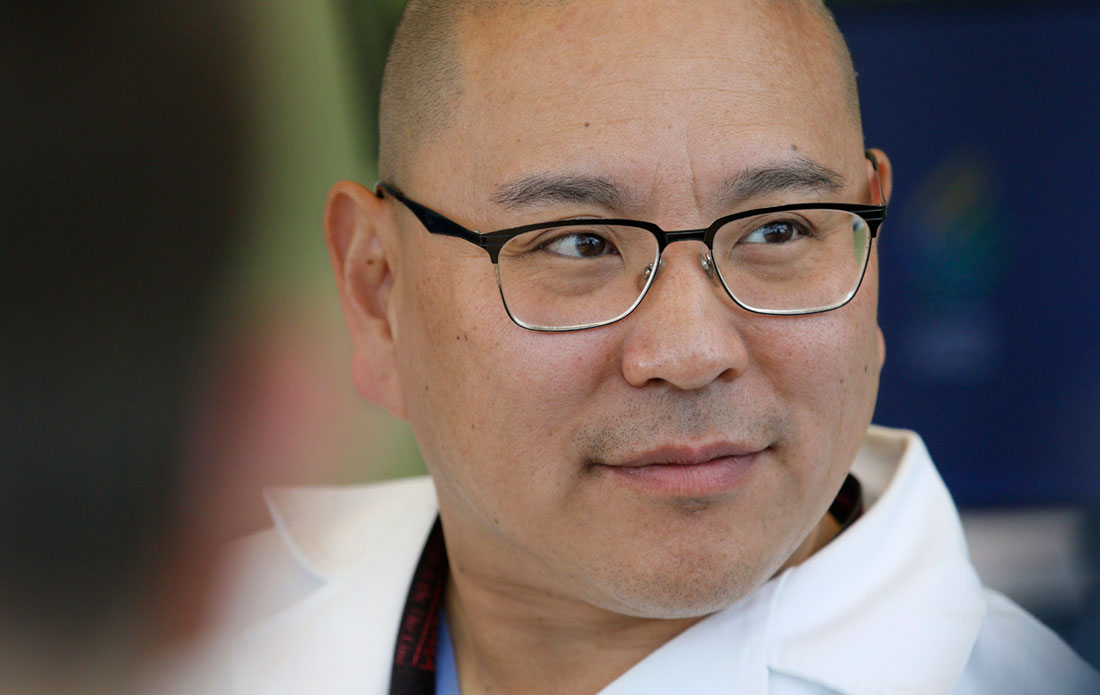 The future is now: Albert Chi, MD, and mind-controlled prosthetics

The first time you meet Johnny Matheny is astonishing. You would be forgiven for wondering: can this be real? That’s because when Johnny reaches out to shake your hand, he’s extending his grasp with the world’s first mind-controlled robotic arm.

He lost his arm to cancer, and what has replaced the missing limb is extraordinary. Johnny is a bionic man, a pioneer. He’s also pretty laid back for a guy who is laser-focused on a mission: doing his part to advance prosthetic technology by light years in one leap, so that others can live easier and more independently. Johnny has his sights set not only on helping fellow amputees but also, one day, paraplegics, stroke victims – potentially anyone whose mobility has been limited by injury or disease.

That’s the ultimate vision he shares with OHSU’s Dr. Albert Chi, Johnny’s longtime doctor, collaborator and friend. Recruited to OHSU in 2016, Dr. Chi joined the faculty as a trauma critical care surgeon and associate professor of surgery. He also holds an advanced degree in biomedical engineering.

Together, he and Johnny work unceasingly to push the boundaries of body and mind. Dr. Chi has moved beyond the word “prosthetic” to describe what they’re perfecting. “It’s a complete replacement engineering solution for the missing arm,” he says.

Here are a few things it can allow a person do: pick up a grape and hold it without crushing it. Play Guitar Hero. Cook a meal. Use a toothbrush. Curl and uncurl each finger, rotate the wrist, point, grasp, grip, reach – anything the human arm can do. All without straps or sockets. That’s because the base is actually implanted into Johnny’s skeleton – and controlled by his thoughts.

Johnny was the first person in the United States to undergo osseointegration surgery to implant a metal rod into the bone of his upper arm. This rod extends past the end of Johnny’s stump and can attach to various prosthetics or prototype limbs. The rod is, essentially, a permanent docking station for a modular prosthetic system that can be upgraded over time as technologies improve.

Even more futuristic than this seamless integration of bone and metal is that the mechanical arm is controlled by the human mind. This mind-body interface is achieved through targeted muscle reinnervation, or TMR, a specialized surgery that Dr. Chi learned from Dr. Todd Kuiken, the inventor of TMR from the Rehabilitation Institute of Chicago. This new surgical procedure reassigns nerves that once controlled the arm and the hand. By reassigning existing nerves, doctors can make it possible for people who have had upper-arm amputations to control their prosthetic devices by merely thinking about the action they want to perform.

Johnny was the first to undergo TMR surgery, performed by Dr. Chi at Johns Hopkins University in October 2011. The best candidates for TMR are those who have had a traumatic limb loss and are missing an arm above the elbow or at shoulder level, because of the neuroanatomy involved. TMR surgery is followed by a virtual training and a specialized rehabilitation program to connect mind and machine, as patients learn through computer simulation how to manipulate the robotic arm.

Johnny’s arm is the most advanced model to date, the latest iteration of technologies developed at the Johns Hopkins Applied Physics Lab and funded by an initial $120 million investment from DARPA. The earliest versions of the robotic arm were one-of-a-kind — so priceless that Johnny could only test them out in the lab. At home, he wore a simpler prosthetic. But this year for the first time, Johnny will be testing his incredible arm under ordinary circumstances. He’ll be able to wear it in everyday life, providing feedback to Dr. Chi and the engineering team that will drive further refinements. Like any new technology, the hope is that advanced modular prosthetics will become cheaper and more accessible in time.

The need is great – particularly among combat veterans, a group Johnny and Dr. Chi share a special connection with. “I’ve had two sons in the military,” says Johnny. “Both of them came back with all their extremities. But some of their buddies did not.” Dr. Chi is a semi-retired commander in the U.S. Navy Reserves and served as a director of surgical services in Operation Enduring Freedom.

At OHSU, he leads a recently-established TMR program that serves patients from across the country. The team of orthopedic, trauma and plastic surgeons provides surgical evaluation and prosthetic recommendations, which can range from inexpensive 3-D printed prosthetics for growing kids to TMR surgery and advanced prosthetics limbs. The ultimate dream, says Dr. Chi, is to expand. His goal is to build a center of excellence for advanced prosthetics at OHSU that would be able to provide all needed services under one roof and would continue to lead in technological and medical innovation.

The opportunity for growth is exponential. “We’ve created this incredible technology and the TMR program is just one application of it,” he says. “Because of my background in trauma surgery, I have focused on people with limb loss. But the applications are really limitless.”

“My arm is just the tip of the iceberg,” agrees Johnny. “And the bottom line is, this is where donors come in. Private funding will enable us to keep working and achieving the end results.”

For amputees, the life-changing innovation has been an artificial limb that is so well integrated with mind and body that it seems like something out of science fiction. But for others, the transformation may lie in the ability to control a robotic arm that’s not connected to the body at all. Dr. Chi and his research collaborators are working to develop eye control for people with neurodegenerative diseases or spinal cord injury who are unable to move anything below the neck. “There is potential to use this technology to enable these patients to interface with objects in their environment simply by looking at them,” says Dr. Chi. Such advances could improve the quality of life for millions. When the future is already here, what comes next can be even more extraordinary.

Support the TMR program at OHSU 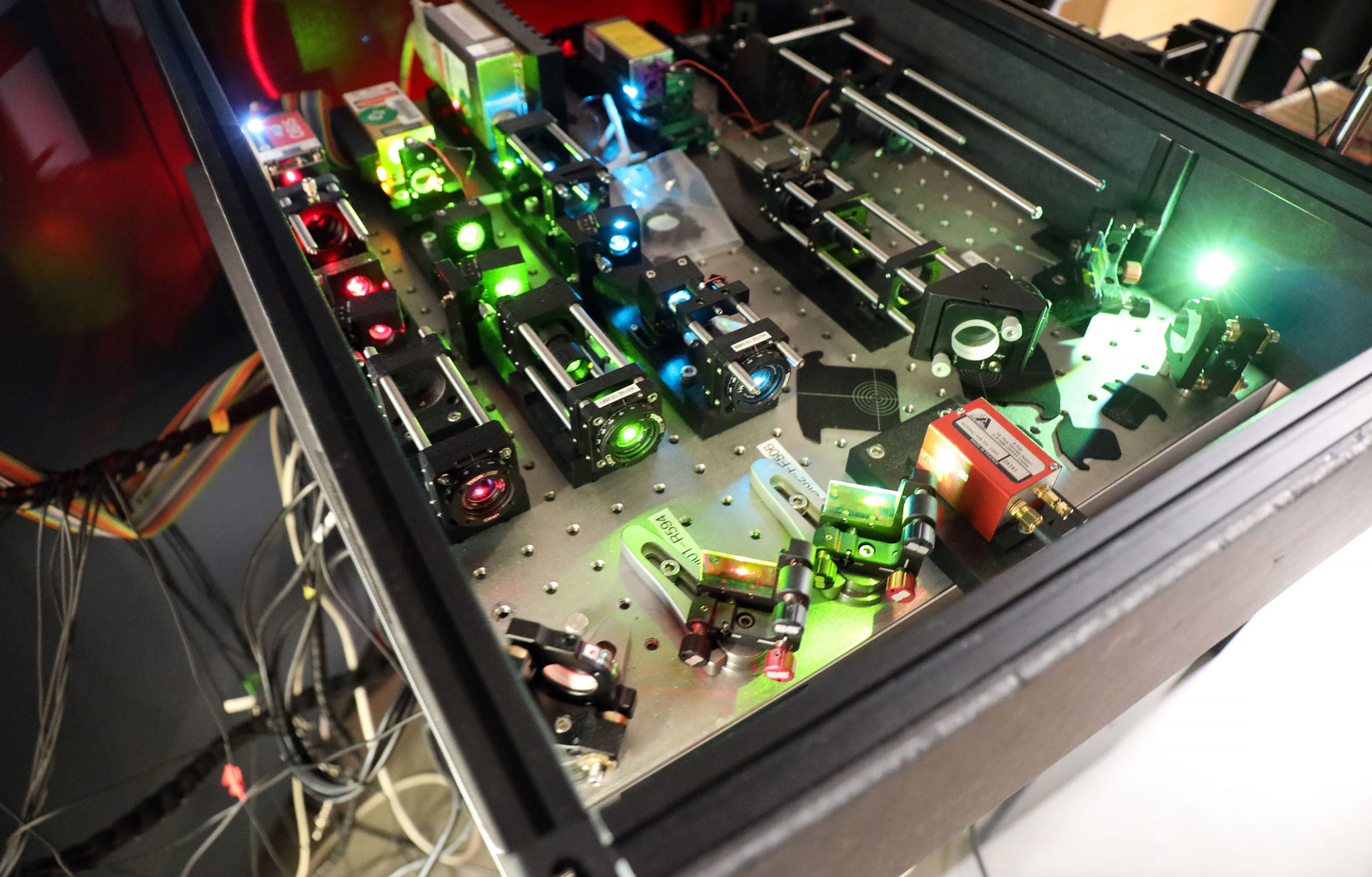