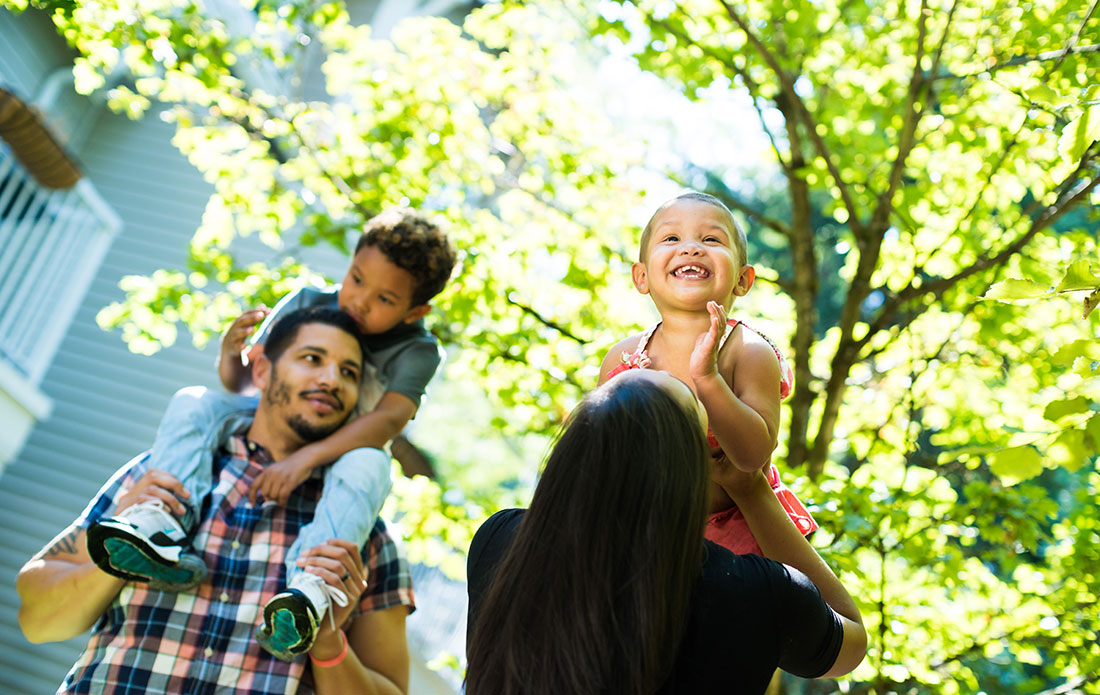 The staff at OHSU Doernbecher Children’s Hospital helped save Lola Johnson’s life — and then she turned herself into a legend.

The year 2017 was a big one for the Johnson family. Sabrina was beginning a brand-new career with the Beaverton police force. She and her husband, Michael, had just bought a new house in Tigard. Their two young children, Orlando and Lola, were thriving.

And then Lola got sick.

At first, the Johnsons thought it was a cold. Doctors told them it could be bronchitis. But antibiotics didn’t help, and their happy, active 15-month-old became a listless little girl, pale and too tired to walk. Things came to a head one evening when Sabrina picked Lola up from her crib.

“She was so weak, she couldn’t even hold her head up,” said Sabrina. “Then I looked down and her lips started going purple.”

The family rushed Lola to the Emergency Department at OHSU Doernbecher Children’s Hospital. “When we walked in, they took one look at her, grabbed her out of my arms and rushed her back to start working on her,” Sabrina said.

“At one point, there were at least 10 people in the room working to stabilize her breathing,” said Michael. “It was overwhelming.”

Kellee Parker, MD, a fellow in the OHSU Hematology and Medical Oncology fellowship program, remembers that night well. “I had just left the hospital to go home when I got a call from the Emergency Department saying they had a young patient in respiratory distress with significantly low blood counts. I wanted to see her, so I turned around and came back.”

What Dr. Parker found was a child who was barely clinging to life. “Lola’s blood counts were the lowest I’ve seen with any of our patients. In a child her age, hemoglobin should be around 12. Lola’s were 1.3. She had a fever, she had the flu, and she was very, very anemic. Looking at her, I had a pretty good idea that it was going to be leukemia.”

The next morning, it fell to Matthew Dietz, MD, to break the news to the family. “I remember thinking, ‘Oh man, this family has already been through so much and they haven’t even had three hours of sleep. I don’t want to go in there and tell them that their daughter might have cancer. Even though there is so much we can do for their child, it’s not news that you want to deliver.”

It certainly wasn’t what Sabrina and Michael wanted to hear, but they were grateful for the compassionate way that they were told. “Of course we needed information, but we also needed a doctor to just sit in the silence with us and let us get past the tears,” said Sabrina. “Dr. Dietz was that doctor.”

“Of course we needed information, but we also needed a doctor to just sit in the silence with us and let us get past the tears. Dr. Dietz was that doctor.”

A series of tests confirmed that Lola had acute myeloid leukemia, a cancer of the blood and bone marrow. And with that, life for the Johnson family suddenly turned upside down. Lola required blood transfusions, respiratory support and chemotherapy; she also had to be quarantined in the hospital for a month to protect her from further infection.

As Sabrina explained, their time in isolation was, well, isolating. “We hadn’t been home and we hadn’t seen our son, because we couldn’t expose Lola to any germs. That first week and a half, it was a lot of non-stop crying.”

However, it wasn’t long before lifelines started coming in from every direction.

Fortunately for the Johnsons, their roots in Portland run deep. Michael has worked in Portland for years, where he’s currently a site safety manager for Raimore Construction; Sabrina went to Benson High School and coached volleyball there for seven years. Michael’s father and Lola’s grandfather, Steve Johnson, is a retired professional basketball player who played for the Portland Trail Blazers in the 1980s. And between Sabrina and Michael, they can count four generations of extended family.

Many of those family members stepped up in the early days to offer support. Lola’s grandparents volunteered to watch Orlando, while Sabrina’s aunt, Dawn Nelson, set up a GoFundMe account to help cover medical costs. Over $23,000 in donations poured in, many from perfect strangers.

“So many of us have been touched personally by cancer; I think people just wanted to help any way they could,” said Dawn.

“So many of us have been touched personally by cancer; I think people just wanted to help any way they could.”

As a new police recruit, Sabrina was terrified that she would lose her job and her health insurance. She needn’t have worried; the Beaverton police force rallied around their rookie, providing meals, knitting blankets and dropping off toys at the hospital.

“First, we made it very clear that we weren’t about to leave her behind with no job and no insurance. Then we notified the other officers about the situation. Many of them donated their vacation and sick days so that Sabrina would have enough time off to see her daughter through this,” explained McGuire.

Lola’s medical team was also rallying around their young patient. It required quite a few players — among the doctors, fellows, residents, nurses, medical students, dieticians, and Child Life specialists, Drs. Dietz and Parker estimate that between 80 to 100 people were directly involved in Lola’s care. While it may sound extraordinary, that level of care is not unusual in complex cases at Doernbecher.

Just days after starting treatment, Lola began to bounce back — and the pale, quiet child was replaced by a vivacious, mile-a-minute little girl. On any given day, you could find Lola racing up and down the hall or charming the nurses at their station.

“She went from being the sickest child on the floor to being the most active toddler, running around and giving these huge belly laughs,” said Dr. Parker. “She had so much life in her, you’d never guess she was sick,” added Dr. Dietz. “I used to joke with her dad, ‘Can you imagine what she’s going to be like when her counts are normal?’”

To say that Lola has responded well to treatment would be an understatement. Her blood counts are now like those of a child who never had leukemia, a remarkable fact given how ill she was. In fact, her medical team calls her a legend. “I can’t remember who first gave her the title, but she definitely earned it,” said Dr. Dietz.

Her medical team calls her a legend. “I can’t remember who first gave her the title, but she definitely earned it.”

While it’s too soon to say whether Lola is in full remission, she’s doing so well that she only has to go in every other month for checkups. That means she can get back to doing all the things she loves ­— like twirling, playing at the park and bossing her big brother around. Lola is also celebrating some pretty big milestones — like turning 2. “It wasn’t a big party, but I got her the fluffiest, pinkest dress I could find,” laughed Sabrina.

“I’m so proud of how Michael and Sabrina handled everything,” added her grandfather, Steve. “They really pulled together, and because of it, Lola will be able to experience the fullness of life.”

Looking back at the experience, Sabrina and Michael said they realize how lucky they were to find such excellent care so close to home.

“In the hospital, we met a family staying on campus that had come all the way from Alaska. Others had packed up and just moved here from other states. Having Doernbecher essentially right in our backyard was incredible,” said Sabrina.

Michael continued, “As a parent, you’re supposed to keep your kids healthy and safe. When you can’t, you feel unbelievably helpless. To find people who can help, and they’re right here in Portland, well…I’m just forever grateful.”

“As a parent, you’re supposed to keep your kids healthy and safe. When you can’t, you feel unbelievably helpless. To find people who can help, and they’re right here in Portland, well…I’m just forever grateful.”

Everyone who was involved in Lola’s journey agrees on one thing: it takes a team effort to see a child through cancer.

“No one person has the expertise to provide all the different kinds of care that Lola needed,” said Dr. Dietz. “The doctors were treating her disease, but we also had nurses and volunteers to make sure she was building her developmental skills. The chemo took away Lola’s appetite, so we had dieticians to help with that. Then there were Child Life specialists, who provide resources to help kids cope during their hospital stay. They stepped in to support Lola and her parents so they could continue to move forward as a family.”

As the Johnsons learned, childhood cancer affects more than the child — it affects the whole family as well as their community. But for every challenge that arises, the team at Doernbecher is there to meet it, standing shoulder to shoulder with their young patients and the people who love them.

“The staff up there was cheering on Lola just as hard as we were,” said Sabrina.

“Although we were so happy to finally leave the hospital, there were also some tears, because it truly felt like we were saying goodbye to extended family. But right now, I know they’re giving that same love and energy to another child that needs it.”