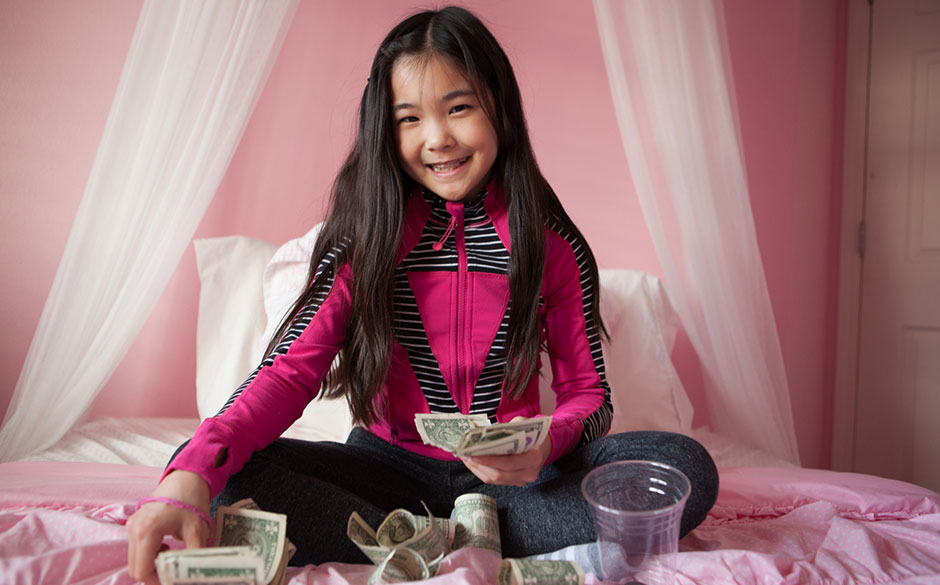 Last summer, eleven-year-old Chloe Lam went from Doernbecher patient — fighting for her life — to Doernbecher donor, determined to raise money to save the lives of others.

In the course of a day, the Lam family’s world was turned upside down by their eleven-year-old gymnast.

At 1 p.m., Chloe Lam was showing off her backflip at school. By 3 p.m., she arrived home, announced she was exhausted and collapsed on the living room floor — an unusual occurrence, according her mom, Sako. Chloe woke up from her nap an hour later with a 104-degree fever and a pounding headache.

Sako called the pediatrician, who recommended they take her straight to OHSU Doernbecher Children’s Hospital. After some initial tests, the doctors at Doernbecher thought Chloe had strep and sent her home with antibiotics.

“There were eight to 10 doctors and nurses in the room just pumping syringes of fluid into her veins, and you could hear them hitting the ground like shell casings.”

But Chloe’s condition only worsened. She fainted and remained unconscious for a few minutes. That’s when her parents called 911 and Chloe returned to Doernbecher in an ambulance. The Doernbecher Emergency Department doctors rushed to pump her with fluids and antibiotics as she was severely dehydrated and her blood pressure was dangerously low.

“There were eight to 10 doctors and nurses in the room just pumping syringes of fluid into her veins, and you could hear them hitting the ground like shell casings,” said Chloe’s dad, Ronald.

However, the doctors were still unsure what infection had taken over her body and made her so sick, so quickly. Doernbecher pediatric critical care specialist Amit Mehta, MD, told Chloe’s parents that they could not get the fluids into her system fast enough. He recommended they put in a central line along her femoral artery. “At one point, we looked and there must have been nine or ten different bags hanging on that IV rack,” said Ronald.

Dr. Mehta told Chloe’s parents that she was a tough little fighter — as most adults with blood pressure this low would have been in a coma or died by this point.

She’s going to make it

Chloe doesn’t remember much of her first days in the hospital, but she remembers waking up in the PICU and asking her parents if they were going to go home. Her parents looked at the doctors for help — they didn’t know the answer. “She’ll go home with you guys, she’s going to make it,” replied Dr. Mehta with certainty. “At that time, we knew we’re in good hands,” said Sako.

After two days in the Pediatric Intensive Care Unit (PICU), Doernbecher pediatric infectious disease specialist Judith Guzman-Cottrill, DO, sat with Chloe’s parents and listened to their story, reviewed her labs, and examined her from head to toe.

“We put all the pieces of the puzzle together and toxic shock syndrome quickly became the most probable cause of her illness,” said Dr. Guzman-Cottrill.

She came into Chloe’s room and spoke the best words the Lam family had heard in days: “We figured it out.”

Chloe had an extremely rare strain of strep. This invasive strain of bacteria, called Group A streptococcus, was emitting toxins into her bloodstream and transforming into toxic shock syndrome, a rare reaction that can turn lethal if not caught in time. Once pinpointed, it can be treated with the correct combination of antibiotics.

Chloe’s parents call it “a lucky coincidence” that both their pediatrician and the paramedics led them to Doernbecher — certain her infection wouldn’t have been recognized if it wasn’t for the talented team who treated Chloe.

“I hope that I can save other lives, just like they saved mine.”

Birth of a philanthropist

Two-and-a-half days after starting on the right antibiotics, Chloe was released from the hospital. And less than a month after her recovery, Chloe wanted to give back to the place that saved her life.

Inspired by a YouTube video, she decided to create a lemonade stand in her neighborhood to raise money for Doernbecher. Dressed in purple nursing scrubs (in honor of the nurses at the hospital) and sporting a homemade, OHSU “I CARE” badge, Chloe raised $311 from her first stand, with the help of her good friends Sarah, Kate and LaCei.

Later that summer, Chloe was selected to be part of Dunks for Doernbecher, a fundraising program that donates $25 to Doernbecher for every dunk made during a Portland Trail Blazers regular season game. That’s when she got the idea to sell lemonade at her brother’s basketball tryouts. With three lemonade stands she raised an additional $465, which she donated to the Gary & Christine Rood Family Pavilion, OHSU’s new guest house for out-of-town families. Chloe believes it’s important to help families and kids stay together, noting, “I wouldn’t have fought so hard if my family wasn’t there by my side.”

A true entrepreneurial philanthropist, Chloe is always looking for new ways to raise money for Doernbecher. She is currently doing laundry for her mom at a rate of $2 per load — all of which she plans to donate.

“I am so impressed by how Chloe and her family have turned a frightening life event into such important, positive work. This is why I love pediatrics and working at Doernbecher,” said Dr. Guzman-Cottrill.

Chloe is not only a grateful patient and dedicated Doernbecher donor; she also aspires to be a Doernbecher doctor or nurse one day.

“I hope that I can save other lives, just like they saved mine,” said Chloe. And between her great generosity and determined ambition — she’s well on her way to doing just that.

Join Chloe in giving to Doernbecher!